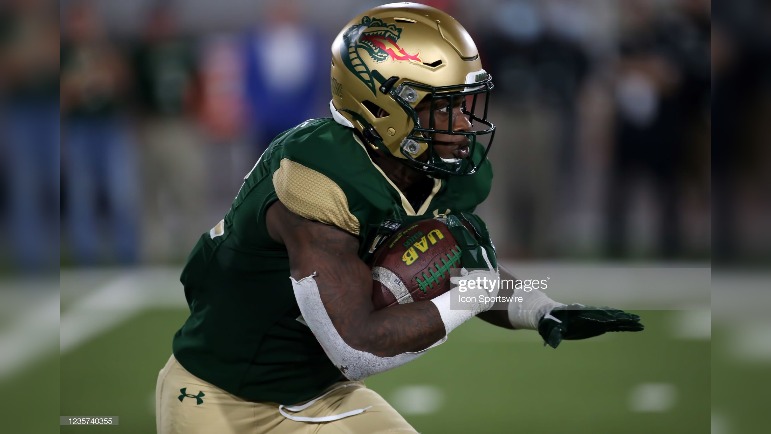 The Bahamas Bowl kicks off College Football Bowl Season where sports betting will be at an all-time high and college scouts will have their last chance to see several draft prospects in pads before the 2023 NFL Draft in April. For several prospects, however, they will get one more opportunity to play live contact football in one of the designated college all-star games that occur after the college football season has concluded. Two of these showcases include the East-West Shrine Bowl in Las Vegas, Nevada, and the Reece’s Senior Bowl in Mobile, Alabama. Several of the Steelers Depot crew, including myself, will have the opportunity to evaluate many of these draft hopefuls as they attempt to boost their draft stock.

For the Blazers, RB #22 DeWayne McBride is the name to watch. The 5’11″, 215lb runner posted his second consecutive season over 1,000 yards in 2022, carrying the ball 233 times for a whopping 1,713 yards (7.4 YPC) and 19 TDs on the ground while chipping in two receptions for 10 yards. McBride is a downhill slasher as a runner, having the size and strength to run in between the tackles as well as the speed and burst to rip off long runs once he gets into the second level. While not much of a pass catcher, McBride is one of the best pure runners in this draft class and has the size and athleticism to become a lead back in the NFL that could be had in Late Day Two or Early Day Three of the 2023 NFL Draft.

UAB has some guys who can be role players but DeWayne McBride has the best chance of making it in the NFL. His stat line this year was ridiculous: 1,702 yards, 7.3 YPC, 19TDs. He's a logical early day three replacement for Monty if they decide to not re-sign him. pic.twitter.com/hff23JjSgr

The Cure Bowl features two Top 25-ranked teams as the Trojans face the Roadrunners Friday afternoon. UTSA boasts a strong passing attack led by QB #0 Frank Harris. Harris doesn’t have the prototypical size you look for in an NFL QB (6’0″, 205lb), but he has been able to take command of the Roadrunners’ passing game, doing a great job distributing the ball to his receivers like a card dealer.

Harris threw for 3,865 yards and 31 TDs this season with only seven INTs. He also is a threat on the ground as a runner, rushing for 588 yards on 120 attempts and nine scores including a 124-yard, three-TD game against Rice. Likely a Day Three or UDFA prospect, Harris is an ideal QB3 you bring in to develop into a potential long-term backup in the league.

Harris has a plethora of weapons to work with on offense with three senior WRs all hoping to get drafted come April: #1 De’Corian Clark, #2 Joshua Cephus, and #4 Zakhari Franklin. Franklin is the most established of the three, being the only one to crack 1,000 receiving yards (86 receptions for 1,100 yards and 14 TDs) on the season. Franklin doesn’t possess great physical traits (6’1″, 185lb), but is a nuanced route runner, has enough speed to win vertical, and possesses the hands and body control to win contested catches on occasion. Franklin has the best shot to get drafted somewhere on Day Three with the other two receivers likely being seventh-round fliers or UDFA signings.

For the Trojans, LB #2 Carlton Martial is a guy you should have your eyes on in this game. Based on measurables alone, Martial shouldn’t be considered draftable, standing only 5’9″, 210lb. However, Martial’s play on the field may make him an exception as the diminutive dynamo makes plays all over the field for the Trojan defense.

Teams usually don't draft sub-5'10" LB, but TRY Carlton Martial could be an exception. Instinctive player who comes downhill, chases to the sideline like this play (w/false step), and brings it to OL. Still plays Teams, too, where he must excel in the NFL. #SnapScout22 pic.twitter.com/2roQP7TTGj

He has posted four-straight seasons of 100+ total tackles as a fifth-year senior along with 10.5 sacks, nine PBUs, eight forced fumbles, and six INTs in his college career. His size will keep him from being more than a Day Three flier, but Martial could find a home as a special teams ace and play and sub-package LB/ box safety role for a defense that wants to bet on his football character and playmaking skills at the next level.