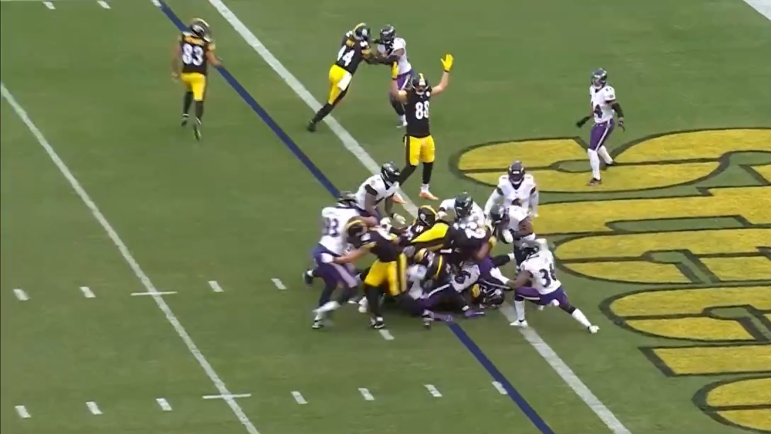 The Pittsburgh Steelers trailed by multiple possessions in yesterday’s loss to the Baltimore Ravens on multiple occasions—but not for long. Baltimore went up 10-0 with a touchdown with 2:36 to go in the first quarter, but the Steelers responded with a touchdown hardly two minutes later.

Similarly in the fourth quarter, after Baltimore got a field goal to go up by nine, Pittsburgh came back in under a minute to put the ball in the end zone a second time and close the gap to within two. So in other words, they didn’t play much football without being within a drive of taking the lead.

That only makes it all the worse that they squandered as many opportunities as they did. They had six possessions out of nine in which they picked up at least three first downs and generally moved the ball well most of the afternoon. Unfortunately, three of those six possessions ended with interceptions, and Pittsburgh knows it can’t afford to play that game.

“It comes down to making plays and capitalizing on our possessions once we get into the red zone,” second-year running back Najee Harris told Chris Adamski for the Pittsburgh Tribune-Review after the game. “That’s what it is.”

The Steelers reached the Ravens’ 23-yard line or better five times during the game. They got 14 points out of it, their two touchdowns. They recorded interceptions twice after reaching the 17- and 23-yard lines, respectively, on back-to-back possessions. They had a field goal blocked from the 22-yard line.

Every single drive after their first two possessions, in fact, at least reached Ravens territory. They had 1st and 10 on the Ravens’ 46-yard line when Mitch Trubisky threw a deep interception to safety Marcus Williams looking for Diontae Johnson.

Who knows what that drive could have led to if not for that error. But of course, that’s not the red zone, or red zone ‘fringe’, as Cameron Heyward recently talked about it (rather, “field goal fringe”, the general idea of not making mistakes when you’re in field goal range).

As center Mason Cole pointed out, the two interceptions from inside the 25 combined with the field goal attempt that they allowed to be blocked was at least nine points that they squandered having a shot at. Given that they lost by two, that could have made a difference.

For an offense with this little margin for error, Harris is absolutely right in stressing the importance of them capitalizing on their possessions when they get into the red zone. For as much as they have improved since the bye week, this is an area that has continued to be an issue.

And I think looking at drives from inside the 20-yard line is too limiting, especially for an offense that would reasonably rely on a lot of field goals. You can’t get inside the 25-yard line, or really even the 30-yard line, without even giving yourself a chance to attempt a field goal cleanly. Definitely not three times in one game.