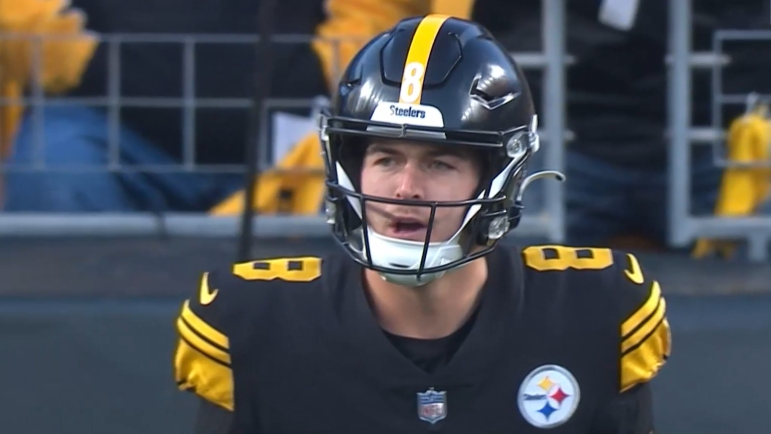 On Saturday night, the Pittsburgh Steelers grew up. Mike Tomlin said it in his press conference after the team’s 13-10 win over the Las Vegas Raiders, and now rookie Kenny Pickett said he believes his team grew up in their come-from-behind win that saw Pickett throw a strike to fellow rookie George Pickens with 48 seconds left for the game-winning touchdown.

Talking to Albert Breer of Sports Illustrated, Pickett said the team and offense grew up over the course of Saturday’s game.

​​“Coach told us, ‘This is where we’re gonna grow up as a team and as an offense,’” Pickett told Breer. “And it was our job to go out there and get it done, and we did that. So I think we definitely grew up some, and that’s a huge positive. There’s still a lot of things that we’re gonna continue to improve on to get to where we need to get to.”

The Steelers’ youth was on display in their final two drives on Saturday Second-year running back Najee Harris and second-year tight end Pat Freiermuth made huge plays on the team’s touchdown drive to get Pittsburgh in the red zone. Obviously, Pickett made the throws he had to make and converted a quarterback sneak on 4th and 1 the play before he found Pickens, who ran a good route and made the catch to give the Steelers the lead. On the team’s final drive, rookie Connor Heyward took a jet sweep 21 yards for a first down on the final play of the game to clinch the victory. The young guys stepped up in crunch time, when the team needed a win to keep their playoff hopes alive and to help honor the life and legacy of Franco Harris, who posthumously had his jersey number retired at halftime after passing away earlier in the week.

The offense had struggled mightily, as their lone touchdown drive was also the first time they had a red zone snap. And it wasn’t because they were hitting deep shots for touchdowns, like was the case when the Philadelphia Eagles only registered one red zone snap against Pittsburgh in Week 8. They just weren’t moving the ball successfully, and the chances of the Steelers winning looked bleak. But Pickett, Pickens, Harris and Freiermuth all stepped up in a big way when they had to, to save the season, despite the offense’s collective struggles for much of the game. That’s growth.

Obviously, there’s still work to be done, as Pickett acknowledged. A herculean effort from the defense allowed 13 points to be enough to win, but most weeks, that won’t get the job done. The offense has to be better going forward, especially as the Steelers claw to fight on to what little hope they have remaining of a playoff berth. But Saturday night’s touchdown drive offered a glimpse into what this Steelers offense has the potential to be. If their young core continues to develop, it could be a special group.