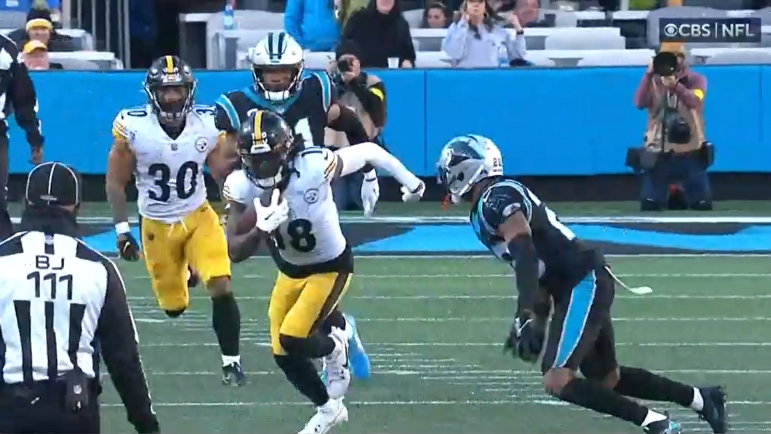 The Pittsburgh Steelers had probably one of their better days of offensive output yesterday against the Carolina Panthers. While they didn’t rely on the passing game, it was largely efficient when used, with Mitch Trubisky completing 17 of 22 pass attempts for 179 yards.

And fourth-year wide receiver Diontae Johnson was the guy he looked for most often, with nearly half of his targets and the majority of his completions going in that direction for 98 yards. He also targeted George Pickens five times, completing two but for some big plays, including a deep 38-yard grab.

The Panthers have some good cornerbacks with Jaycee Horn being the young star, but when C.J. Henderson was sidelined in the game, they called upon Keith Taylor Jr. to step up. While he struggled, he felt he was up to the task and blamed himself rather than the matchup.

“I don’t think they were really that much of a hard assignment,” he said of covering Johnson and Pickens when speaking to reporters after the game, via transcript—specifically in response to a question about what makes them such a hard assignment, mind you.

While Johnson has lost a lot of love from the fan base, he proved once again today that there’s nobody better than him at getting open—at least that much can be said about him. His target share speaks to that, and so many of those targets came on possession downs, the Steelers converting 12 of 16 on third down, largely thanks to Johnson’s efforts.

And Taylor had his hands full when he drew that assignment. The second-year fifth-round pick who has been a spot contributor when needed certainly looked as though he was dealing with a hard assignment, part of the reason he ended up with nearly a career-high eight tackles.

He got stacked up against Johnson often late in the game, which could have worked out better. The wide receiver beat him twice on consecutive third downs to continue to move the chains, including on a 3rd and 14. You generally don’t want to give up 3rd and 14s, especially from your opponent’s own 21.

But you need to have confidence and a short memory to be successful in the NFL. You can’t just think ‘I got my butt kicked because this guy’s a lot better than I am’. It always has to be ‘I didn’t do good enough, and I can do better’. So as far as I’m concerned, good on him for having the right mindset.