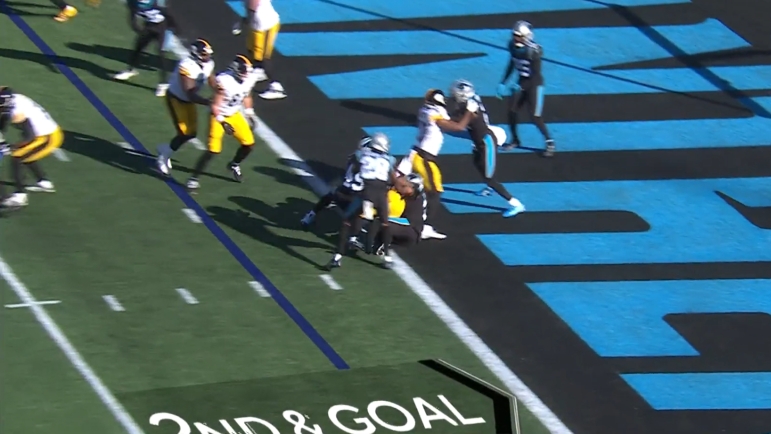 Premium talent is a must to build a championship team. But you also need a complete roster, or as close as you can get to it, to survive the attrition of a 20-game slate or more. That takes finding significant contributors late in the draft, or even after the draft.

And for the Pittsburgh Steelers, rookie college free agent running back Jaylen Warren is looking like one of the better undrafted players they’ve picked up in some time. He’s had a very encouraging rookie season so far to the point where he’s carved out a regular role for himself on offense.

In fact, he became the first Steelers rookie undrafted free agent to score a touchdown in the regular season in over a decade with his first-half touchdown on Sunday against the Carolina Panthers. The last time a rookie undrafted player put the ball in the end zone for a regular season game for Pittsburgh was in 2011, when running back John Clay scored a touchdown against the St. Louis Rams in week 16. Tight end Weslye Saunders also scored a touchdown that season in week 12.

While it’s a great story for Warren individually, it’s also valuable for the Steelers on the broader spectrum. Having tangible examples of undrafted players who have had success on your team helps you sell yourself to future undrafted free agents to sign with you.

You can throw signing bonuses at players all you want, but ultimately what players are looking for is the best available opportunity. That comes down to your team’s individual roster makeup at that time, but it’s also about your organizational reputation.

The Seattle Seahawks, who at their peak were regularly competing for championships, put together a brochure for agents to boast their bona fides when it comes to undrafted rookies making their rosters and contributing.

Pittsburgh used to have a stronger reputation for finding opportunities for college free agents than they have in recent years. They did have a string of successes along the offensive line, though they usually required developmental time before contributing, and often were originally signed by other teams. Ramon Foster was the native signing who managed to contribute as a rookie, all the way back in 2009.

Of course, when it comes to undrafted signing history, most Steelers fans are probably going to think first about 2008 Defensive Player of the Year James Harrison, a player who took many years to develop. But there were also other greats like Donnie Shell and Jack Butler and Willie Parker. That’s a lot to live up to for Warren, but his career is just getting started, and I’m sure this won’t be his last touchdown. Perhaps the first of many.