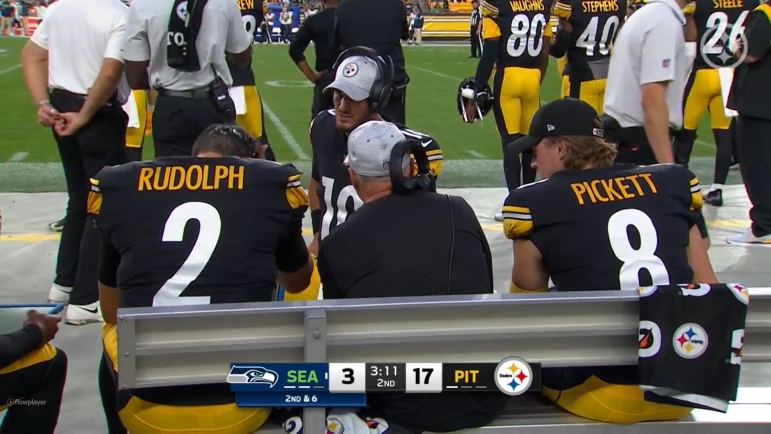 The Pittsburgh Steelers are not a very good team this year. there’s no need to pretend that that isn’t true. Every time the Steelers fail to make the postseason or just have a sub-standard record, head coach Mike Tomlin (and previously former general manager Kevin Colbert) would be the first to say you are what your record say you are.

The Steelers’ record is 5-8 and that isn’t good by any measure. There’s no grading curve, either. At least not as it concerns the 2022 season. But there is the future to consider. Quarterback Kenny Pickett is that future, or at least that’s how the team is going to operate. But in the meantime, he’s become a part of a tight quarterback room with Mitch Trubisky and Mason Rudolph, who’ve had each other’s backs in adverse circumstances.

Trubisky has had to grapple with getting benched. Rudolph, too, has been demoted down to the third string. Pickett has been dealt the worst hand of the lot, suffering two concussions. While the others would refuse to comment on his health, however, Trubisky was happy to provide an update on his spirits, and of the room generally.

Pickett will not be out there today, but you know he’ll be with them supporting them however he can as Trubisky and Rudolph suit up, the latter for the first time in 2022. And yet one wonders how drastically different this room could look in a few months.

Rudolph, for starters, is an unrestricted free agent and he already knows there’s no chance of him landing a starting opportunity by staying put at this point. He made that gamble last year anticipating that Ben Roethlisberger would retire and hoping he would have a shot at filling in before the Steelers drafted Pickett.

Trubisky is under contract, but with a base salary of $8 million. While that’s not outlandish money for a backup, it might be a higher price than they’re willing to pay. They brought him in this year to be a bridge starter and he served that function, even if they didn’t realize initially that it would be a three-and-a-half-game-long bridge.

I think we can pretty much guarantee that at least one of Trubisky and Rudolph will be gone in 2023. It’s possible that both are. It’s also possible that either one of them is brought back. They could release Trubisky and re-sign Rudolph, who would inevitably come cheaper (sorry, Charlie). That’s actually my preferred scenario.