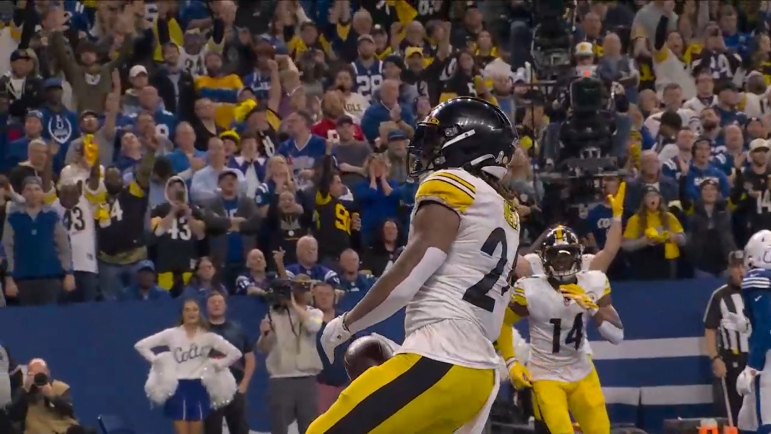 Pittsburgh Steelers running back Benny Snell took advantage of his first snaps of the season in Monday night’s 24-17 win over the Indianapolis Colts. Snell toted the rock 12 times for 62 yards and a touchdown while adding a reception for six yards. The former fourth-round pick of Kentucky had been a non-factor for Pittsburgh’s offense for much of the last two seasons, with his value coming via special teams, an area where he excels. Talking to the media today, Snell talked about his excitement level being able to contribute on offense and about playing for the Steelers.

“I’m just ready man. I don’t know how to explain it, it’s just a feeling you can’t really explain. I’m locked in, I love the game, I love football, and I love being able to help the offense, so I’m glad I was able to do so,” Snell said via a video posted Steelers.com.

The running back also touched on being thankful to have the opportunity, even when he hasn’t been playing as much offensively.

“I’m thankful. I’m thankful to be in the position I am, have such good teammates. Being able to play for the Steelers, be with a good offense every day. I’m very aware of what I’m capable of also,” Snell added. “I can never be too down knowing what I can do.”

After starting five games in his first two years in the league, Snell hasn’t really played a role in Pittsburgh’s backfield. Last season, despite being the main backup to Najee Harris, Snell only touched the ball 38 times and averaged a paltry 2.7 yards per carry. This year, he was usurped on the depth chart by Jaylen Warren, but after Warren went down during Pittsburgh’s Week 11 loss to the Cincinnati Bengals, both Snell and Anthony McFarland got their chance on Monday Night Football. Harris ended up leaving the game with an abdominal injury, and it was Snell finally getting another chance to show what he can do leading the Pittsburgh backfield.

While Snell’s production hasn’t been great, you have to love seeing a guy who’s seemingly always had a great attitude play well when he gets a shot. Even though Snell has had chances before and failed to take advantage, he’s a guy who has never complained and always seemed content playing whatever role the team decided he was best suited for.

While it was a backfield that featured the likes of Kerrith Whyte Jr. and Trey Edmunds, Snell did finish second on the Steelers in rushing in 2019 with 426 yards on 3.9 yards per carry. Since then, his numbers have dipped, but he showed some flashes that year that he could be a capable back.

If Harris and/or Warren miss additional time, it would be great to see Snell return to his rookie year form, even if just for a little while. He’s a fun guy to root for, and although he probably hasn’t met expectations (although a fourth-round pick running for 794 yards his first two years in the league isn’t awful), he seems to truly love being in Pittsburgh and is grateful for the opportunities he has. We’ll see if he gets any more this season, and if he does, if he can take advantage of them like he did on Monday.