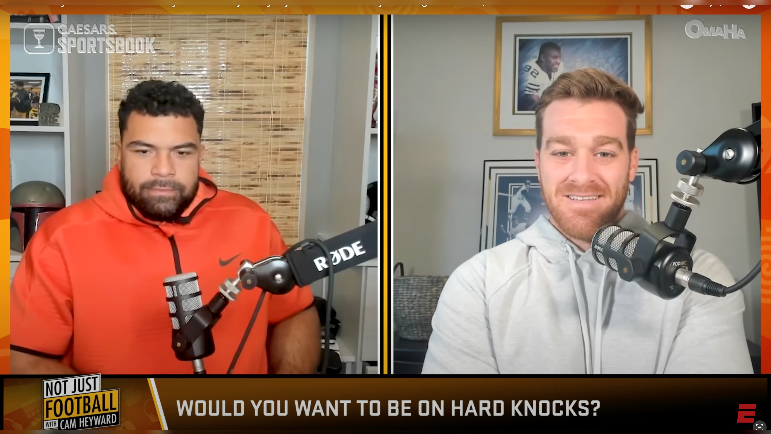 Technically, the Pittsburgh Steelers might not be eligible for the popular HBO “Hard Knocks” series in training camp until the 2024 offseason — at the earliest — but for team captain Cameron Heyward, there’s no chance he will ever be on “Hard Knocks.”

To be eligible for HBO’s “Hard Knocks” in training camp, a team must meet three prerequisites.

The Steelers, as is well known, made the playoffs in 2021, so that eliminates them entirely for at least next season’s training camp edition. If that weren’t a prerequisite, the Steelers would still be eligible, considering they’ve never been on “Hard Knocks” and have Mike Tomlin in what would be entering his 17th season as head coach.

As far as the in-season “Hard Knocks” goes, the prerequisites to be on that series is unknown. HBO has worked with the Indianapolis Colts and the Arizona Cardinals the last two years, both of which made the playoffs the year before.

Still, if Heyward has his way, he’ll never be on “Hard Knocks.” Quite honestly, the Steelers might never be on it either. There’s no interest.

Appearing on his latest “Not Just Football w/ Cam Heyward” podcast Wednesday, Heyward addressed the “Hard Knocks” questions with the Steelers all but eliminated from the playoffs after talking about the Cardinals with co-host Hayden Walsh.

Admitting that he hasn’t watched “Hard Knocks” the whole way through a season once, Heyward still had a strong stance on the behind-the-scenes look at day-to-day life in the NFL.

“I will never be on a Hard Knocks. I don’t have the personality for it, I don’t think,” Heyward said, according to video via the NFL on ESPN YouTube page. “I think I don’t want to, like, I know it is a prereq to talk to the media, but man, I don’t want to have to have a dear diary every single day.”

Heyward, who has been named ‘The Chief’ Award winner by the Pittsburgh Chapter of Pro Football Writers of America three times in his career, including twice in the last three years, certainly has the personality to be on “Hard Knocks.”

He handles the media rather well and has really taken to the podcasting game. Cameras on throughout the facility wouldn’t really affect him, but he does believe that the cameras being inside the facility has led to some guys trying hard on “Hard Knocks” to put on a front and be something that they’re not.

“I feel like so many guys try to show out and they’re not actually who they are sometimes,” Heyward added. “But, I think I’d rather do pre-season. The regular season, because there’s so much on the plate during the regular season, to ask me to do anything like that would be…I couldn’t commit to that.”

The in-season “Hard Knocks” makes sense in theory, but based on the season with the Colts last year and so far this season with the Cardinals, it hasn’t provided the juice that the training camp ones have produced throughout the last two decades.

It’s a great show overall and provides a ton of great exposure for teams and players overall, but for Heyward, who is essentially a graybeard at this point in his career in the NFL, it is an unnecessary, unwelcomed addition to the day-to-day life of an NFL player.

Fortunately for Heyward, he won’t have to worry about that anytime soon with the Steelers, at least in training camp editions.