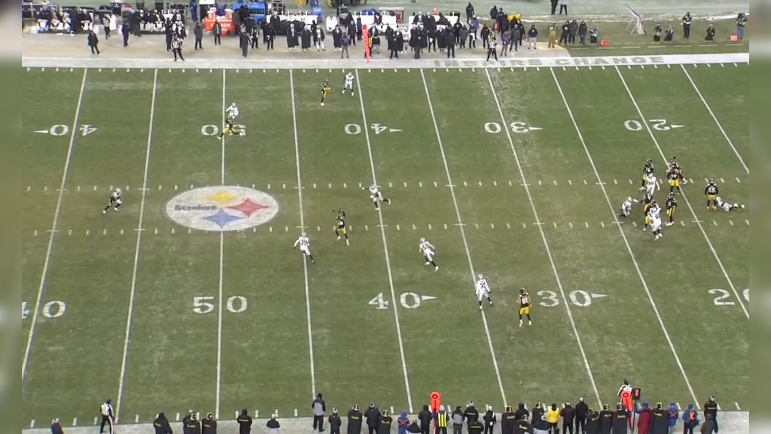 Even on a night in which he was rather good, hauling in five passes for 64 yards in the 13-10 win over the Las Vegas Raiders on Christmas Eve, one negative play continues to be brought up for Pittsburgh Steelers standout wide receiver Diontae Johnson.

In the second half with the Steelers needing a spark offensively, Johnson found himself open on a crossing route over the middle. Rookie quarterback Kenny Pickett fired him the football in stride, but Johnson took his eyes off of it while turning upfield looking to make a play after the catch, resulting in a frustrating drop.

Of his five catches on Saturday night, four went for first downs for Johnson. Still, the drop gets the most attention though, right or wrong.

Speaking from inside the Steelers UPMC Rooney Sports Complex on the South Side Wednesday, Johnson addressed the drop, stating that as a leader he has to make those catches and that he can’t let negative plays affect him.

“Being in that leadership role, I gotta make those catches no matter what,” Johnson stated to reporters Wednesday, according to video via the Tribune-Review’s Chris Adamski. “I put a lot of pressure on myself too, but at the same time, I’m supposed to make those catches. Nothing changes, I just have to focus a bit better, try not to turn upfield without looking it in all the way first.

“At the end of the day, stuff like that is going to happen. I can’t let that get me down, stop me from making more plays. As you see, I was able to bounce back after that and have another catch after that. Little stuff like that, that’s what keeps me going, that’s what drives me. That’s what pushes me to keep getting better.”

To his credit, the drop didn’t affect his play. He continued to stress the Raiders’ defense with his route running, drawing a lot of attention throughout the night.

According to Pro Football Focus, Johnson recorded a grade of 64.2, down from back-to-back 80+ grades in Weeks 14 and 15 against the Baltimore Ravens and Carolina Panthers. The drop against the Raiders was also his first one since Week 13 against Atlanta and gives him just six drops on the season on 127 targets.

Regardless of the work that Johnson puts in from now to the end of his career, the negative label of drops will, unfortunately, follow him. While he’s had his issues in the past, he’s put in the work to try and correct the problem, and for the most part, has done so, so it’s a bit unfortunate for him that a drop in a win is a focal point in his media session.

It could have been a rather large play for the Steelers on the night. Instead, it went for a frustrating drop on first down in the third quarter that ultimately resulted in a three-and-out for the Steelers.