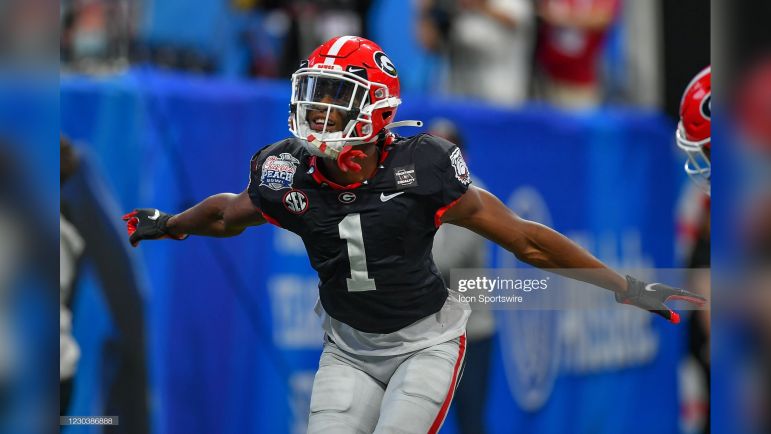 George Pickens might be #1 in your hearts. And if he had his way, he wanted to be #1 in your programs, too. Pickens joined Arthur Moats and Deke on the Arthur Moats Experience With Deke podcast Thursday afternoon and explained the origins of his #14 jersey. He told the show that wasn’t the number he wanted but what he rolled with.

“That’s the number they gave me, to be honest,” Pickens told the show. “I tried to get #1 but I think it’s sacred or something like that.”

Pickens wore #1 at Hoover High School, a five-star recruit who initially committed to Auburn before flipping to Georgia. He kept that #1 at UGA where he excelled his first two seasons. Across 2019 and 2020, he averaged well over 14 yards per catch and 14 combined touchdowns, a big-play threat in the Bulldogs’ run-heavy offense. He tore his ACL in the winter of 2021 and missed most of his final year but returned to help Georgia on its championship run before declaring for the draft.

After working him out at his Pro Day, the Steelers drafted him in the second round, 52nd overall, and he got his #14. Like most rookies, especially non-first-round picks, he didn’t get much of a say in what number he got to wear. Only a handful of Steelers’ players have ever worn #1 for the franchise and from 1941 to 1980, no player did. Kicker Gary Anderson is by far the most famous one do so, carrying it from 1982 to 1994. QB Anthony Wright was the last do to it in 1999, though he never appeared in a game wearing it. Perhaps the number joins the long list of unofficially retired ones, even if it was technically once handed out.

With the way Pickens has played his rookie year, he might be able to eventually convince the team to allow him to swap. But he admitted he isn’t thinking about that right now so those #14 jerseys should be safe for the foreseeable future.

Historically, #14 hasn’t been kind to receivers over the years. Sammie Coates, Limas Sweed, didn’t do it proudly. But Pickens has shown no signs of busting out as those names did. While he might not wear #1, he has the makings of being a #1 receiver in this offense, and that matters far more than any jersey number.

You can listen back to the whole interview by clicking below.