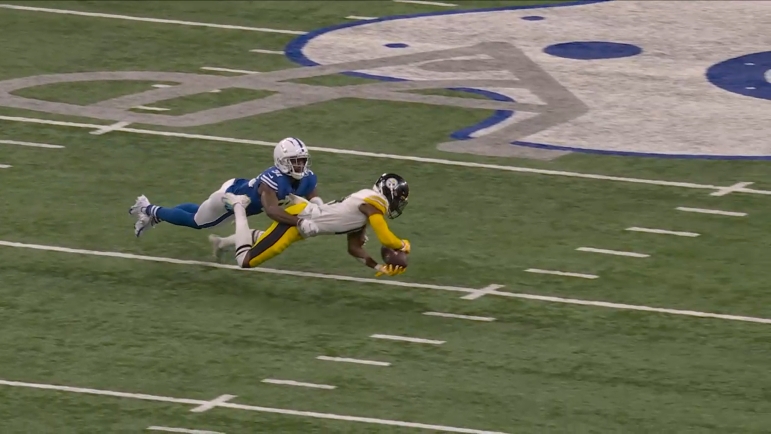 Pittsburgh Steelers rookie wide receiver George Pickens has caught 36 passes for 510 yards and two touchdowns, plus a two-point conversion, through the first six games of his career. He’s off to a pretty good start, but there’s plenty of meat on the bone. Meat the team is only starting to get to as his rookie year progresses.

You see, more than just about any other starting wide receiver in the NFL this season, Pickens has been largely asked to be a one-trick pony. Nobody with comparable playing time has run a higher percentage of go route. And he’s been almost exclusively used on the outside for most of the season, but they’ve been mixing it up more and more, ever so slightly, as the year drags on. And he’s here for it.

He’s still playing outside almost exclusively, but we have been seeing his route tree fleshed out more and more, and we’re starting to see him get targeted more in those opportunities. His critical conversion on 3rd and 9 on the first play of the fourth quarter on Monday, for example, came on a crossing route from outside the numbers.

It wasn’t the most elegant route I’ve ever seen, but he did a nice job of creating enough separation off the stem of the route to give Kenny Pickett a window to throw into. Alex Kozora talked about that route and other developments in his game in a video post earlier in the week.

There is no question that Pickens has been an exciting player as a rookie for the Steelers. I do think it’s important to acknowledge the areas of his game that are in need of growth, however, and we shouldn’t just accept that that growth is going to happen. Just look at where Chase Claypool is now, and JuJu Smith-Schuster.

The pure talent is undeniable. He’s had a couple of disappointing drops this year, but some of the catches he has made have been remarkable and have spurred conversations about some of the best catches ever made.

But being a great wide receiver is ultimately about doing all of the little things consistently on a play-to-play basis and being able to do just about everything. Pickens is still limited and still has some rough edges. They’re starting to be sanded down, but the jury is out on whether or not he will become a complete receiver. At least his attitude indicates that he welcomes the challenge.