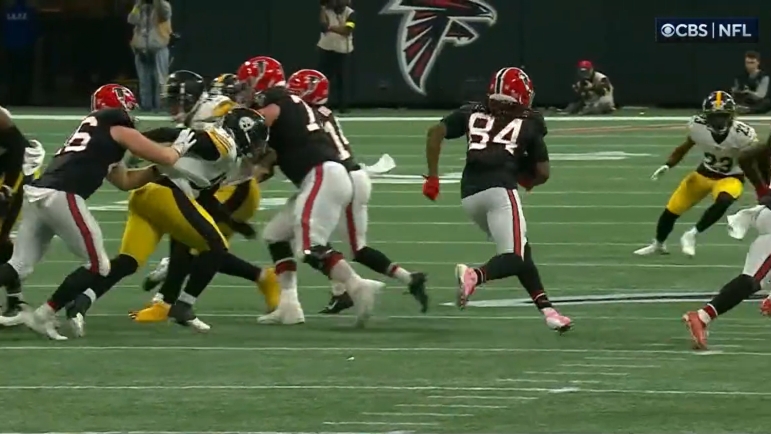 The Atlanta Falcons ran the ball just six times in the first half. Only two of those times were successful plays. In fact, they lost yardage on half of them, including twice for running back Cordarrelle Patterson. Defensive lineman Larry Ogunjobi dropped him for a loss of three on one play after bullying the center into the backfield. Later, safety Minkah Fitzpatrick knifed through to bring him down four yards behind the line.

Their 18 net yards of rushing on six carries was far from indicative of the kind of running team the Falcons had been this season, nor was it a sign of things to come. They would run the ball 22 times in the second half for 128 yards and nearly ran themselves into a comeback win.

“Yesterday we kind of got lackadaisical in the run game,” third-year outside linebacker Alex Highsmith admitted speaking to reporters yesterday from the locker room, via the team’s website. “They were kind of running it down our throats in that second half.”

Why yes, yes they were, rattling off some long drives. They had an eight-play, 70-yard, four-minute touchdown drive followed by a 16-play, 78-yard drive that spanned over nine minutes, only being held short of the end zone likely because of a series of self-inflicted penalties.

The defense had a very solid and encouraging first half, but the second half was anything but, at least until late. Fitzpatrick sealed the game with an interception after the punting team and Pressley Harvin III was able to pin the Falcons back on their own two.

But they didn’t get a lot of rest up until that point. Between the Falcons’ two long second-half drives, the Steelers’ offense gained all of two yards, going three and out on a possession that lasted all of 55 seconds despite the fact that it began in the third quarter and ended in the fourth.

After the defense eventually held late in the drive and survived without giving up the lead, the offense did come back with a nine-play drive that lasted over four minutes, but they still had to punt. That’s when the special teams and then the defense stepped up big to close things out.

Highsmith and crew know that these trends can’t continue, though. Stacking wins means playing consistent football. You can’t play 30 minutes of football and expect to win against better teams than the Falcons, surely, and they have a better team coming up in the Baltimore Ravens.