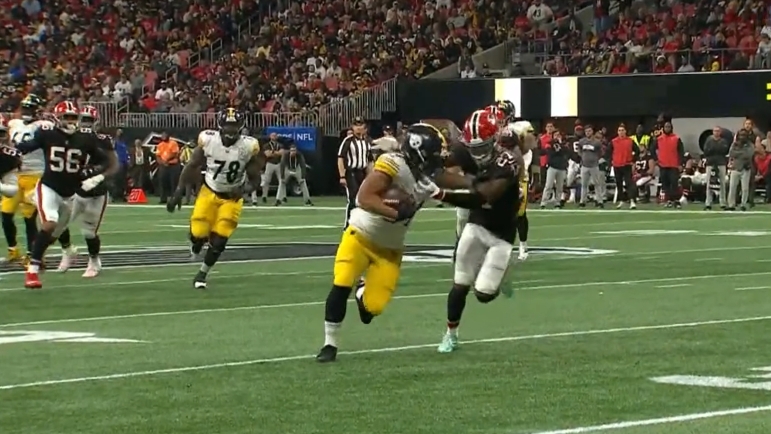 The resurgent running game has been a critical component of the Pittsburgh Steelers’ recent successes, even if they are currently mild, preliminary ones. Averaging over 150 yards on the ground per game over the past five weeks, however, is night and day from where the team has been not just earlier this year but in recent years generally.

And it’s partly been fueled by a shift away from the bell-cow back formula. Make no mistake, running back Najee Harris continues to be the focal point of the running game, adding another 87 yards on 17 attempts yesterday, but their ability to get contributions from other parts of the roster has been important, as the backfield continues to expand.

“You could see us starting to lean on them, they started to get tired in the run game,” tight end Connor Heyward told reporters about the Falcons after the game, via transcript. “Najee ran well, Jaylen [Warren] ran well, Benny [Snell Jr.] ran well, it’s cool having so many guys that can go in there and be fresh and keep on doing whatever they’re doing and there’s not drop-offs.”

Interestingly, Warren only got one carry in this game (although he also had two receptions.) He had gotten out of the mix in recent weeks due to injury, exiting the Bengals game before picking up a carry and then missing the subsequent game in Indianapolis. He had 15 carries combined in the two games before that, however. He has 195 rushing yards on the season on 39 carries.

Snell has only gotten involved over the course of the past two weeks due to injuries, but they seemed to call him into service intentionally yesterday after his strong performance a week earlier, using him as a short-yardage back.

The fourth-year veteran finished the game with 24 rushing yards on six attempts, with five of his six carries going for successful plays. He also caught an 11-yard pass as a little bonus. And last week, of course, we also saw contributions from Anthony McFarland Jr., who is currently back on the practice squad but is available as a call-up at any moment.

As I mentioned, though, it’s not just the backfield anymore. Quarterback Kenny Pickett actually just eclipsed 200 rushing yards on the season yesterday, marking the first time since 2007 that a Steelers quarterback recorded that much in a season. Ben Roethlisberger had 204 that year. Pickett is up to 209.

Aside from quarterback mobility, offensive coordinator Matt Canada’s continued fondness for getting the ball in wide receivers’ hands on jet sweeps continues to be a meaningful component of the game plan, though it is a mixed bag. Steven Sims had some success yesterday, though it seems about as often as not to result in an unsuccessful play. But hey, you have to try to know, right?