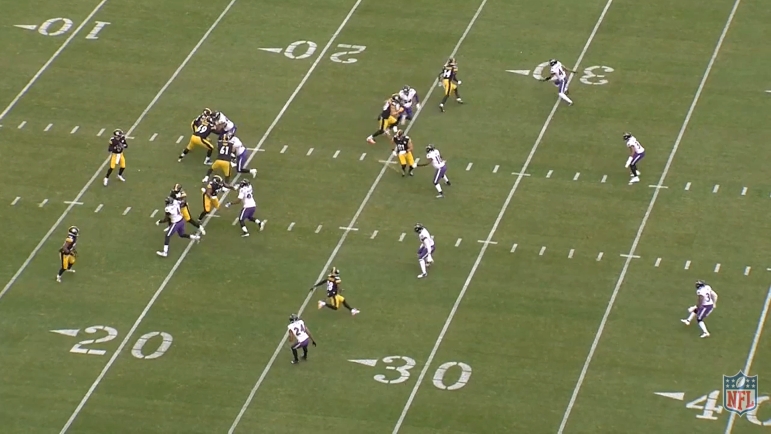 No team is immune to egos and emotions in their locker room, or on the field. The wide receiver position has a reputation for attracting those sorts of personalities, though it’s also built-in, as it more than any other is so predicated upon others doing their job so that you can do yours, and doing your job well doesn’t guarantee you’ll have an opportunity to do anything with it.

Former Pittsburgh Steelers quarterback Ben Roethlisberger knows a thing or two about dealing with wide receivers who can be a handful when they’re frustrated on the field—to speak with great understatement—so it’s notable when he has something to say about their current rookie, George Pickens, who was animatedly upset multiple last week—and he pointed out head coach Mike Tomlin’s own words on the subject when speaking about quarterback Mitch Trubisky’s aggressive play.

“Hey, Coach, you just got done saying that you don’t mind a guy blowing up on the sideline and causing a lot of questions in your locker room,” he said on his Footbahlin podcast. “I guarantee those questions came up in the locker room this week. I guarantee that guys had to answer questions about it.”

Last week, he said that he believes the one pass target that he received in the second half of the game, which went for all of two yards, was designed specifically to get the rookie the ball and try to appease him. And he said in his latest episode that he expected them to get him the ball early last week; additionally, he believes they tried even though it didn’t work.

“I said, ‘I’ll bet you any amount of money that within the first four plays they try and throw George the ball. Any amount of money’,” he told his podcast co-host. “Because that’s the way it always works. Every coordinator, Canada was gonna do it, Tomlin, everybody was gonna do it. And the first play of the game, Kenny [Pickett] looked to throw George the ball.”

Now, I went back and looked at that play myself, including from the all-22 angle, and I’m not so sure he ever really looked in Pickens’ direction. He did look to that side of the field, but Pickens was on the far side, outside the numbers, with two other targets to his inside. But nevertheless, I digress and defer to the Hall of Famer.

“Now, the DB was sitting on it so he couldn’t throw it, but I was like, ‘There it was’,” Roethlisberger insisted. “He looked right at him and it wasn’t there, and I was like, ‘Yep’, sure enough he was trying to get him the ball, because that’s the oldest trick in the book.”

I think we can fairly surmise that that’s how he would have approached a similar situation with former Steelers wide receiver Antonio Brown, but as we’ve learned after the fact, there was a lot more going on in that man’s head than meets the eye. Or maybe a lot less? Either way, it wasn’t pretty.