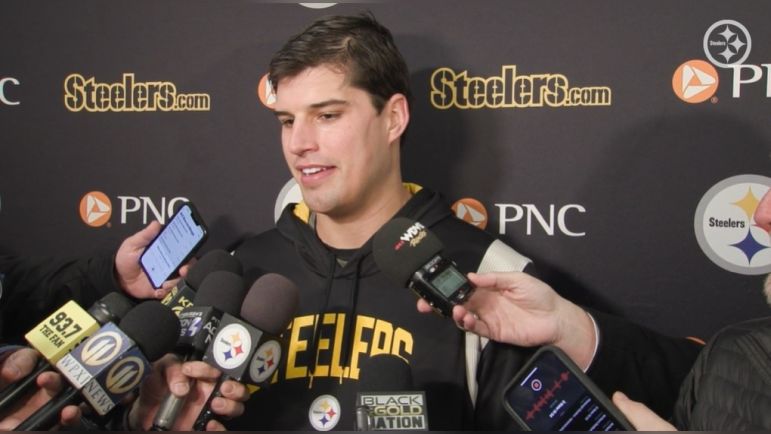 If there is any skill that Pittsburgh Steelers quarterback Mason Rudolph has successfully honed this season holding the clipboard, it has been his sardonic wit. He’s been interviewed twice this week because of the fact that Kenny Pickett is in the concussion protocol. Getting significant reps for the first time since training camp, he’s done a good job, to his credit, of making points through his answers by turning questions around.

When asked, for example, about how valuable it would be for him if he does play on Sunday to have gotten so many mental reps during the season up to this point as the number three quarterback, according to the team’s website, he responded, “I think physical reps are more beneficial, but you make the best with what you have.”

He could have taken the middle road and simply said, ‘yes, of course, those mental reps have been very valuable’. Instead, he chose to be honest and express his feelings rooted in his competitiveness. He’s never been shy to say that he wants to play, even as a rookie, and he’s gone backward this year in terms of his opportunities, so, yeah, he’s going to let his feelings be known.

And even though I’m not among those who believe Rudolph has been gravely mistreated by the organization, I’m totally on board with him perhaps toeing the line of standard pool interview etiquette and saying what he really thinks.

Because what quarterback who actually loves the game and loves to play would be satisfied with running the scout team? I would hope nobody. I want my third-string quarterback to be mad that he’s not getting reps. If he’s not, why is he here? Does he care?

It’s fair to question Rudolph’s talent and abilities. But there’s never been a doubt about his competitiveness or his love of the game. Everything he’s done or said since he’s gotten into the NFL has been driven with one goal in mind, which is to get on the field.

His career and no doubt his ego took a big blow this year, first when the team signed Mitch Trubisky in free agency and then even graver when they drafted Kenny Pickett. I suspect he really believed and was told, that he would have a shot at being the team’s next starter when Ben Roethlisberger retired.

The way things worked out in free agency and the draft made that, at best, extremely unlikely. He performed admirably throughout the offseason process and in the preseason as well, but the lure of the shiny new toys was too appealing to resist.

But will he get a chance to prove himself in this upcoming game? Honestly, at this point, I don’t think so. But that’s because I have a feeling Pickett is going to play. I think if he doesn’t there’s a very reasonable chance that Rudolph starts over Trubisky, but if the rookie is ready, he’s going to be out there.