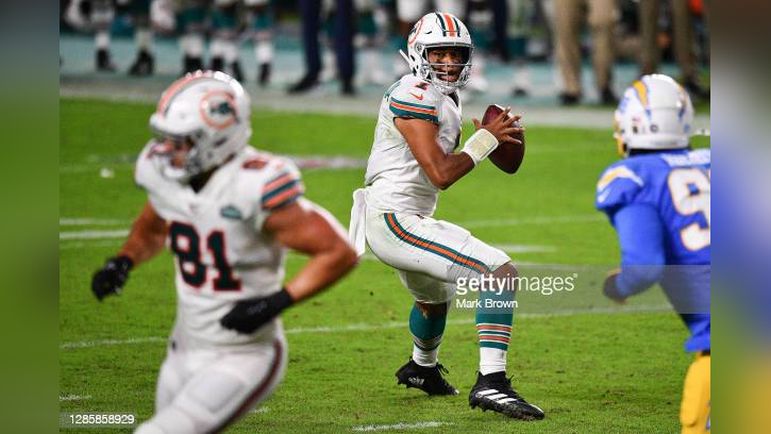 The Pittsburgh Steelers’ path to the playoffs hinges on one (or both) of the Miami Dolphins and Los Angeles Chargers losing out. With the Dolphins, who are losers of four straight, losing to the Green Bay Packers on Sunday afternoon and the Chargers having a chance to clinch a berth with a win over the Colts on Monday Night Football, most hope in Pittsburgh rests on the Dolphins losing out.

The odds of that happening may have just gotten a little higher, as for the third time this season, Miami quarterback Tua Tagovailoa is in concussion protocol, according to Miami head coach Mike McDaniel. Tagovailoa entered the protocol in the Dolphins’ Week 3 win over the Bills but cleared during the game, but in Week 4 he suffered a scary concussion on Thursday Night Football against the Cincinnati Bengals that caused him to miss time. With this being his third time in the protocol and the second time where he might miss time, the Dolphins may be more careful with their franchise quarterback.

According to Barry Jackson of the Miami Herald, Tagovailoa discussed symptoms when meeting with doctors today and is in protocol, but no one recognized anything during the game.

ESPN’s Adam Schefter tweeted out the play where Tagovailoa appeared to be concussed, on a hit at the end of the first half where his head bounced back off the ground. Tagovailoa didn’t miss any time in the game, meaning he played the whole second half with a concussion or concussion-like symptoms if that was the hit where he was injured.

This would seem to be the play on which Dolphins’ QB Tua Tagovailoa was injured, when his head bangs the ground. pic.twitter.com/zCQXadHm2r

The Dolphins travel to New England on Sunday to take on the Patriots in a game where there’s currently rain and possible thunderstorms in the forecast. Obviously, Miami would be at a disadvantage if Tagovailoa were to miss the game. He would likely be replaced by Teddy Bridgewater, who has thrown for 522 yards, three touchdowns, and three interceptions in place of Tagovailoa this season. Skylar Thompson, a rookie seventh-round pick, is also an option as he has thrown for 278 yards this year, but the team will likely go with the veteran in Bridgewater especially given the playoff implications on the line.

For Pittsburgh, nothing that happens with the Dolphins will matter if they can’t beat both the Baltimore Ravens and Cleveland Browns to finish out their season. Pittsburgh has to win out or they’re out of the playoffs, regardless if other teams lose out. They’ll know their fate by game time on Sunday, as their Week 17 matchup with Baltimore was flexed to Sunday Night Football. With Pittsburgh’s playoff odds slowly but surely increasing, Sunday is going to be a very important day.