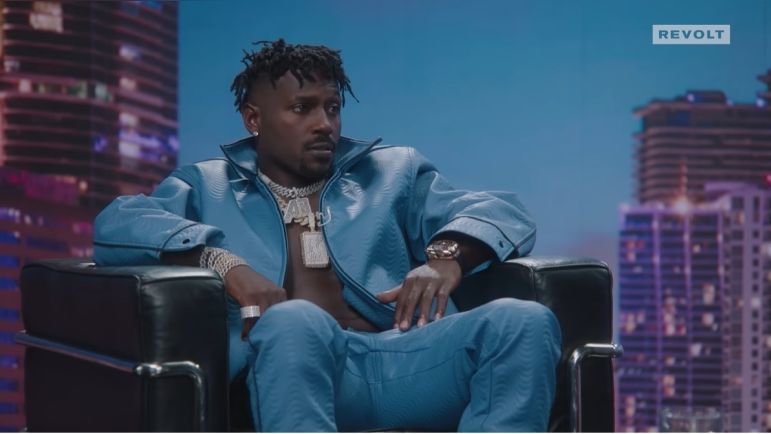 An arrest warrant has been issue for former Pittsburgh Steelers’ WR Antonio Brown for domestic violence battery charges. Reports first surfaced last night and they were confirmed Thursday morning. NFL Network’s Cameron Wolfe tweeted out this screengrab of the warrant information via the Tampa Police Department.

There is an active arrest warrant out for former NFL WR Antonio Brown from Tampa PD for domestic violence battery. pic.twitter.com/RUN0BpXji7

Exact details over the allegations against Brown are still largely unknown. Police have yet to make an arrest and as of this writing, Brown has not turned himself in.

According to The Tampa Bay Times’ Joey Knight, it is a misdemeanor battery charge, not felony charges. There is currently no bond.

An arrest order has been issued for former #Bucs WR Antonio Brown on a misdemeanor battery charge, according to Hillsborough County Sheriff's Office records. No bond at this time. Stay tuned.

We will update this post with more information about the case as we receive it.

UPDATE (12:31 PM): Per FOX 13’s Aaron Mesmer, court documents reveal Brown is alleged to have locked the mother of four of his children out of her house, tossed out her belongings, threatened to shoot her, and threw a shoe at her. He then refused to come outside when Tampa police arrived.

#DEVELOPING: Former Buc WR Antonio Brown accused of domestic violence. According to court docs, mother of 4 of his kids says he locked her out of her Tampa house, tossed out her belongings, threatened to shoot her, threw a shoe at her, then refused @TampaPD request to come out. https://t.co/gic8WMdAtV pic.twitter.com/nHnHqKwGPf

UPDATE (3:21 PM): Surrounded by police, Brown is reportedly refusing to come out of his home.

Antonio Brown has locked himself in his home during standoff with Tampa police https://t.co/lcGiCft4On pic.twitter.com/2x4uDiqs7L

UPDATE (5:11 PM): Police have responded to media reports and do not currently categorize Brown’s situation as a “standoff,” though they are currently at his home. Per NBC’s Sam Brock, police are not positive Brown is even inside his home. They also say they’ve made “multiple” attempts to arrest Brown.

Tampa PD– there have been multiple 'attempts to take Antonio Brown into custody' but there is *not an ongoing standoff.* Police say he's "not communicating," not sure if he's even in home at this point, but do not want to risk officer safety over misdemeanor charge @NBCNews

Brown hasn’t played in the NFL since last season when he stormed off the field as a member of the Tampa Bay Buccaneers, taking off his jersey and running off the field and into the tunnel. The Bucs released him shortly after that.

Brown’s stardom has collapsed since demanding a trade out of Pittsburgh. Originally sent to the Raiders, he never played a down for the team, butting heads with then-GM Mike Mayock and being released before the season started. From there, he spent one game in New England before seemingly finding stable ground in Tampa Bay, winning a Super Bowl with the Bucs. But another outburst ended his time in Tampa and likely his NFL career. Now 34 with a tarnished reputation, Brown has had multiple run-ins with the law and this serious allegation seems to be the latest.