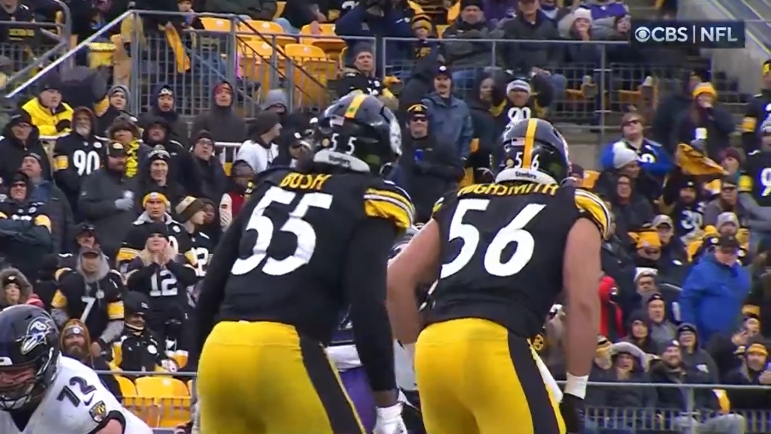 Reasoning: In what has been a mostly positive, and certainly improved season, Devin Bush just had probably his worst game of the year against the Baltimore Ravens, struggling in particular with his run defense and shedding blocks.

The Steelers have a decision to make when it comes to Devin Bush after this season. They already chose not to pick up his fifth-year option, which was a no-brainer given the chances to how that works beginning with the class of 2018 (the year becomes fully guaranteed when exercised rather than at the start of the fifth year), but they still have to decide if he has a future with the organization.

If we only had Sunday’s game against the Ravens to go by, then it would be a firm no. He looked closer to last year’s form in that game than he had in any other game this season. By and large, he has played a more physical and proactive brand of football this year, but against Baltimore, he looked more timid, indecisive, and overmatched in the physicality department.

His easily being turned out of the hole on a secondary block for J.K. Dobbins’ long 44-yard run is just one example of many in which he failed to step up for this defense—not that anybody in the front seven has anything to write home about as it concerns their performance against the run.

Now, one game doesn’t define a player’s season, let alone their career, and that’s absolutely something that we should keep in mind. Still, the issues that he showed against the Ravens are not new to his tape, but rather a reversion to form based on what we saw last season, when former players were calling him out.

But the topic at hand is Sunday’s game, and that’s as bad as he’s looked since 2021, plain and simply. And he played considerably more than both Myles Jack and Robert Spillane in the game. The coaching staff may review playing time distribution after this one. His snap count has been on an upward trend in recent weeks.