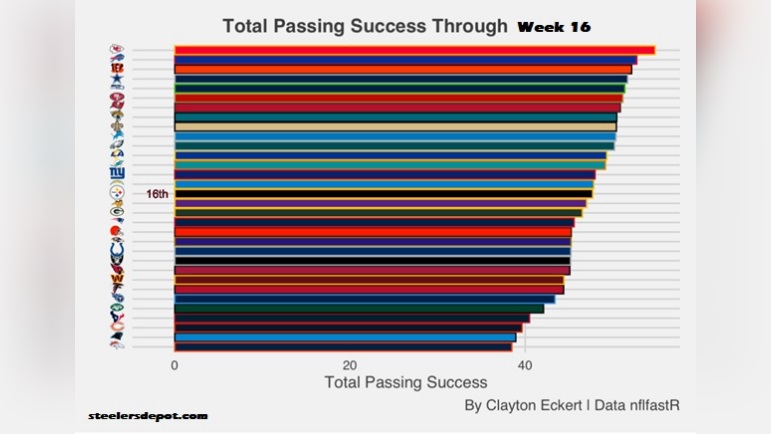 Today I wanted to look at how passing offenses have fared through the 2022 season, using success rates by down, field position, game halfs, and weekly views as well. Let’s jump right in. 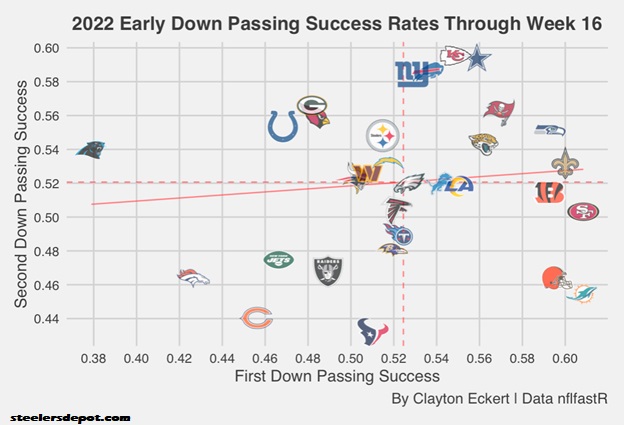 The Pittsburgh Steelers are just below the mean on first down with a 51.5% success rate which ranks 20th in the NFL. This is their lowest ranking by down, and obviously the most common, in which they’ve attempted the 13th most passes in the league. This is one of the biggest areas of improvement I’m hoping for moving forward, and if the success rate on passing first downs can improve, it will only add fuel to the engine of the Pittsburgh offense that has been able to move the ball as of late. On second down, Pittsburgh fares well across the league with a 54.8% success rate that is comfortably above the mean and ranks tenth in the NFL. This highlights an overall improvement of getting in more manageable third down situations, particularly the last three games, and really hoping this maintains or optimistically improves the final two games of the 2022 season for this young offense.

Speaking of money downs, let’s see how NFL teams have fared on third and fourth down, where passes that pick up a first down or touchdown are considered a success: 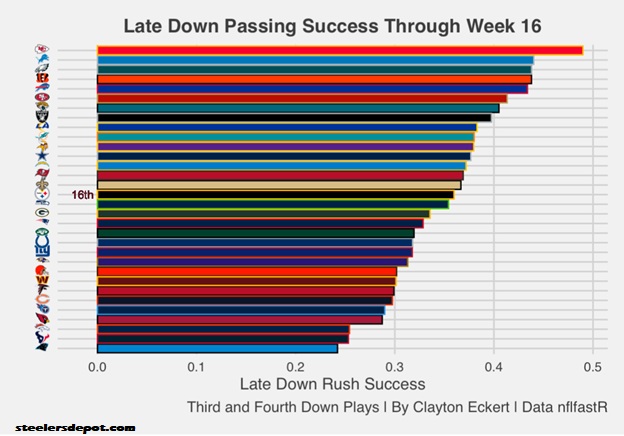 Pittsburgh lands in the middle of the pack when it comes to late down success, ranking 16th in the NFL. The Steelers are tied for the 11th most passing plays in these situations, and have converted 36% of the time. Very average in the NFL, which highlights second down as the biggest aid to the team’s recent ability to sustain drives through the air.

Where the team is failing the most though is getting near the red zone and fizzling out.

To illustrate this point, let’s look at what I’ll call “extended red zone passing success” which will be at the 30-yard line or less. Here are how teams’ have fared inside and outside of the extended red zone: 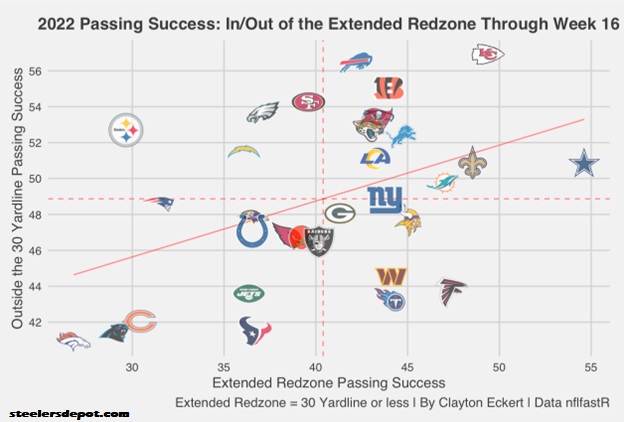 Here we see Pittsburgh off by their lonesome on the top left of the graph, a very telling visual giving great comparative context to where their success (and lack thereof) has come. The Steelers rank a very low 30th in the NFL at a poor 29.7% success rate in the extended redzone, which only tops a recent opponent in Carolina and Denver. With the NFL mean above 40% in the extended red zone, hopefully the offense can make strides in this area to close the season, finishing on drives such as the late go-ahead touchdown for the win last week with more regularity. Outside the 30-yard line has been a whole different story, with Pittsburgh’s offense playing very well with a 52.7% success rate, which lands them at an impressive eighth rank across the league. This highlights the stark difference in success by field position this season, tying for the second rank in the NFL with an average of 6.4 total plays per drive and moving the ball overall, then falling off a cliff as they near the end zone. This is obviously a huge area of needed improvement I’ll be monitoring the rest of the season, and knock on wood Pittsburgh can near the rest of the pack in extended red zone success these final two games.

Next, here are how NFL teams have fared by half: 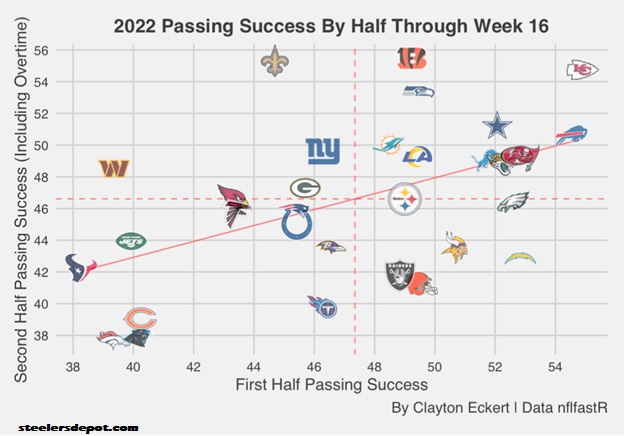 Here we see Pittsburgh has been stronger in the first half, at an above the mean 49% success rate that ranks 15th. Their second half success rate of 46.6% is at the league mean and ranks 17th, so game half has not been a huge difference in terms of success rates, and with a lack of drop off has helped keep the team in close games, particularly since week 12, going 4-1 in those matchups. There are of course many other factors that contribute to this, but overall encouraging and hope the second half passing success trends positively the final two games in attempts to close the season on a high note. 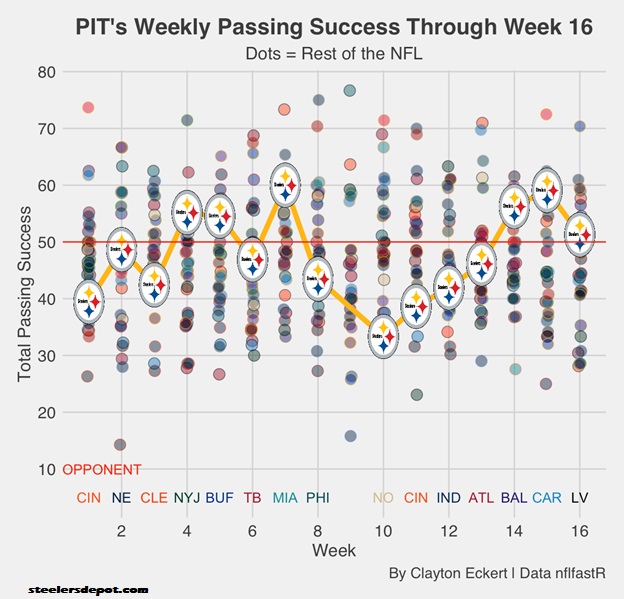 Very interesting to see when the highs and lows came for this team. The first three games of the season were all below the line (50% success rate), with quarterback Mitch Trubisky throwing at a 60.5% completion rate in that span along with two touchdowns and an interception.

Week seven game against Miami was the top ranked game this season, with a 60% success rate where quarterback Kenny Pickett had a high 72.7% completion rate along with a touchdown. The fails were volatile though, namely throwing three interceptions in the game. This game closes a streak where 3/4 games were above the line, with the week four and five games against the Jets and Bills the others. In the Jets game, quarterback Mitch Trubisky started, but had a low 53.8% completion rate and an interception, leading to Pickett taking over in the second half with a strong 76.9% completion rate, but similarly extreme lows in another three interception game. Against the Bills, Pickett was impressively above the line considering a whopping 52 attempts and playing from behind in the smashing 38-3 loss, but also had an interception. So in these three games, one touchdown (Pickett) and eight interceptions which adds important context to the success rates.

Then a five game lull of below the line passing success ensued, starting at week eight against the Eagles. Coming out of the bye in week ten, the Steelers posted their lowest passing success rate of only 33.3% against the Saints, where Pickett had a 60% completion rate and no touchdowns or interceptions. This started a streak of five games where Pickett went without an interception, encouragingly correlating with a positive trend against the Bengals, Colts, and Falcons, adding two touchdowns in this span.

Pittsburgh will face the divisional opponent Ravens this Sunday, and in their last affair in week 14 posted a 56.3% success rate, their third best mark on the season. Pickett exited this game early and Trubisky had a very strong 73.3 completion rate along with a touchdown, but three of his eight incompletions were interceptions. He cleaned this up nicely the following week against the Panthers, providing an even stronger completion rate of 77.3%, the best rate for either quarterback along with the teams second ranked 59.1% success rate of the season, taking care of the ball but no touchdowns either. In Pickett’s return last week, we see a bit of a downturn but still above the line with a 51.3% success rate, a 66.7% completion rate, along with a touchdown and interception. It will be very interesting to see how the numbers shake out to close the season, and hopefully Pittsburgh can continue their overall positive trend of late. Particularly looking for a multi-touchdown passing performance which discouragingly has not happened in 2022, while hopefully keeping their turnovers down as well to close the season.

Now for how teams’ have stacked up in total success rates to close: 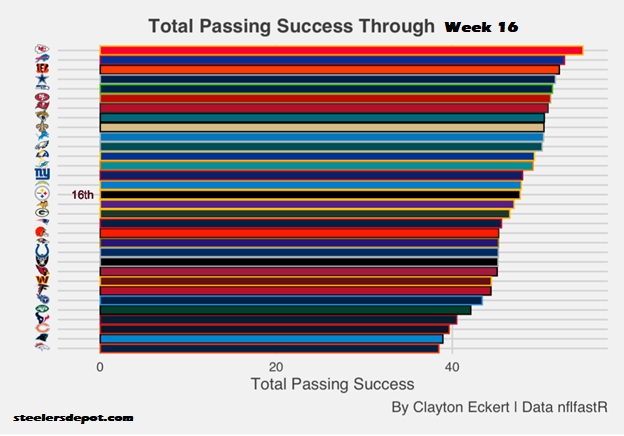 Wrapping a bow on it all, the Pittsburgh Steelers land at 16th, with a 47.7% total passing success rate. On the season, they rank top ten in second down passing success (tenth) and outside the 30-yard line (eighth). They land in the middle of the league in late down success (16th), first and second half success (15th and 17th), and a total success rate that ranks 16th. The areas of struggle have been first down passing success (20th), a lull but positive trend in the weekly success rates from weeks eight-13, and the biggest downfall of the passing game has been the extended redzone, where they plummet to 30th in the NFL. Hopefully we see improvements in these struggle areas along with staying above the line in the success rates as they have the last three weeks, particularly needing to close drives stronger when near or in the red zone, which would be huge for this team and Steelers passing offense, who have the lowest total passing touchdown percentage of 1.9% in the entire league.

What are your thoughts of the Steelers passing offense through week 16? How do you think Pittsburgh will perform in this regard the final two games of 2022? Thanks for reading and let me know your thoughts in the comments!