Today I wanted to look at how NFL run defenses have fared through the 2022 season thus far, using success rates by down, game halfs, and weekly views as well. From a total rush yards standpoint, Pittsburgh’s defense currently ranks sixth in the league with 1144 yards allowed, a very strong and encouraging element this season overall. Let’s jump right in. 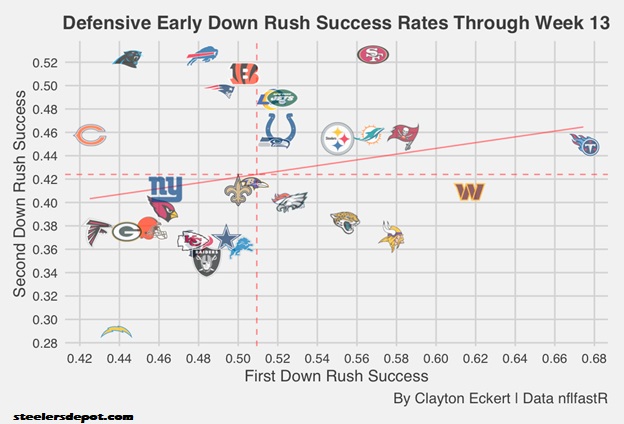 Here we can see Pittsburgh is one of nine teams above the mean on both first and second down, with their 55% success rate on first down the stronger of the two and ranks eighth along with 45.5% on second down which ranks 12th. First down is obviously the most frequent, so their high rank there is very encouraging and impressive. Here’s to hoping the strong early down success continues against strong rushing attacks in the division (Ravens twice and the Browns), along with the Raiders on the upcoming schedule, and thus putting offenses in tougher situations on late downs.

Speaking of late downs, how have teams fared on third and fourth downs where rushes that do not pick up a first down are considered a success? 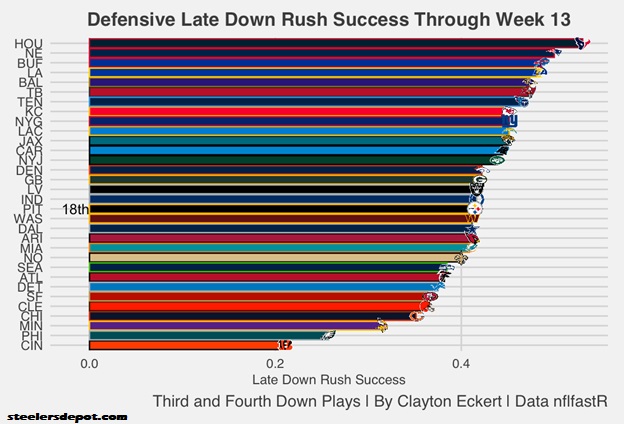 While these situations are far less frequent, we can see this is an area the Steelers need to improve, allowing offenses to move the chains on late down rushes 41.5% of the time, which ranks 18th. Considering the number of plays is tied for tenth most in the NFL as well, really hoping this is the biggest area of improvement, which would provide a crucial situational element to their already strong play for the remainder of the season.

Here are the total success rates, now that we’ve seen the rates by down: 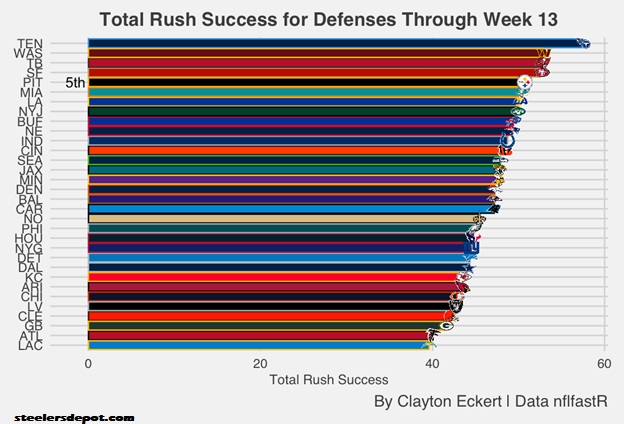 Very encouraging top five rank in comparison to the league, though their very strong fifth ranked 50.7% total success rate does drop off slightly in comparison to the 49ers and above (Titans, wow). So, Pittsburgh’s defense has encouragingly fared very well on early downs where runs are most common, but giving offenses life on the less frequent and crucial drive extending situations on late downs.

Here is a weekly breakdown for added context: 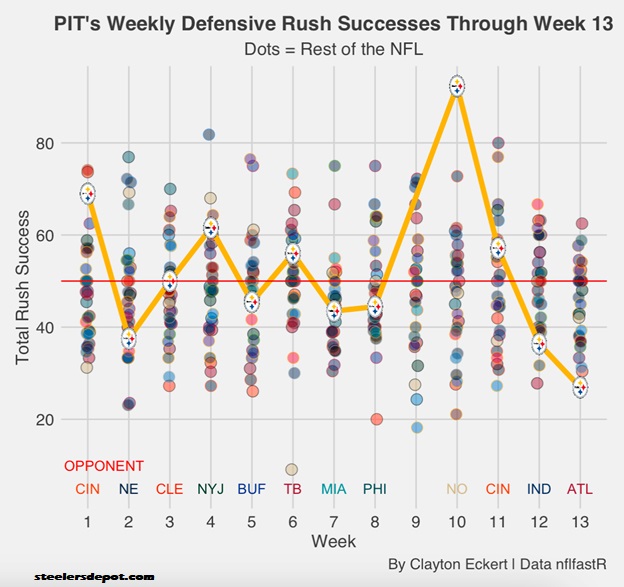 Very telling visual as we learn more than the raw numbers. First, the Pittsburgh’s best outing by far was in week 10 against the Saints where only gave up 29 yards and a 2.1 average to running back Alvin Kamara and Swiss army knife Taysom Hill, posting an otherworldly 92.3% success rate which was by far the best result in the 2022 season and over 10 percentage better than any other game! Week one was second best, with a 69% success rate in the season opener and first matchup against the Bengals where they limited running back Joe Mixon to only three yards a carry. Week four against the Jets ranked third, with a 61.5% success rate against running back Breece Hall (3.9 a carry and a touchdown), but held fellow back Michael Carter to 1.7 on nine carries. Three other performances at or above a 50% success rate, encouragingly in the second matchup against the Bengals in week 11, week six against Tampa Bay, and very impressively against the Browns great divisional rushing attack in week three.

Now for the other side of the coin, the three lowest results. First up was the week two outing against the Patriots, when their success rates came in at 37.5% and allowed running back Rhamondre Stevenson 5.2 yards a carry along with fellow back Damien Harris a 4.7 average. Discouragingly, the two worst results on the season have come most recently, with a 36.4% success rate against the Colts and a great running back in Jonathan Taylor, who had 4.3 per carry but Pittsburgh did keep his yardage to only 86. Last week against the Falcons strong run game was their worst mark on the season by far (26.9%) which was the ninth lowest mark of any team this season. All three of their running backs averaged over four yards per carry in a particularly strong third quarter, two of which were above five a clip. Here’s to hoping the dip below the line the past two weeks isn’t a sign of things to come with the aforementioned strong rushing offenses ahead.

I was also curious to see how defenses have performed by half: 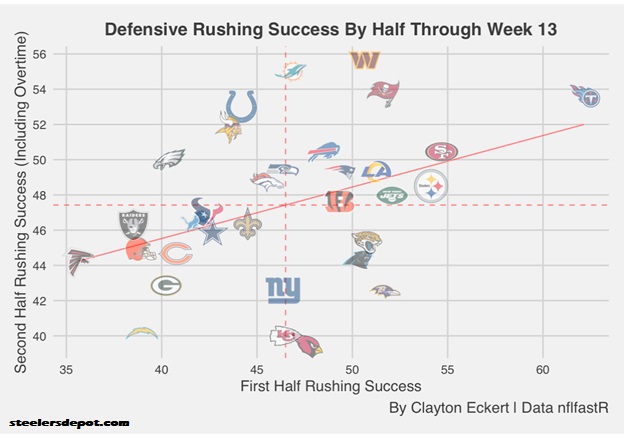 With the Falcons game in recent memory, where Pittsburgh’s run defense fared well in the first half but struggled out of the locker room, I wanted to see how that compared to the season averages. We do see that the Steelers fare extremely well on first down, with a 54.1% success rate that ranks third in the NFL! Their 48.5% in the second half and overtime is noticeably lower, though still above league average and ranks 14th. So definitely less successful as games wear on, but still encouragingly above the NFL mean in both.

Next, I wanted to see how the Steelers defense has fared against scrambling: 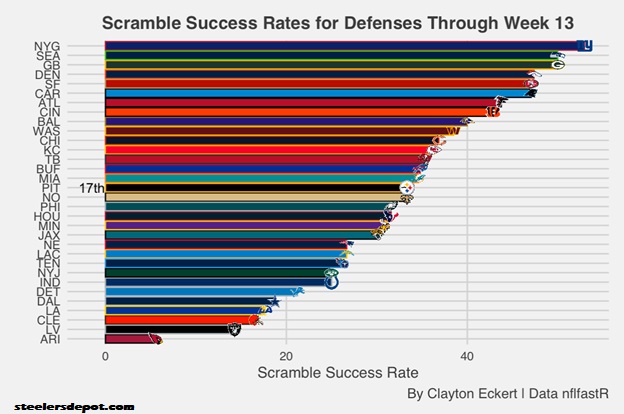 As we can see, this is another area the Steelers defense can improve, ranking 17th on their 57.1% success rate. The Ravens will likely be without quarterback Lamar Jackson in this week’s matchup, who leads the league in scramble yards which is huge, but backup Tyler Huntley is more than capable in this regard so it will be interesting to see how the Steelers run defense plays in this regard. Bengals quarterback Joe Burrow got loose for a double explosive 47 yarder in week one, but Pittsburgh limited him in the rematch for only five yards on three attempts. Bills quarterback Josh Allen went for 42 yards on two attempts in week five highlighted by an explosive 21 yarder. Miami quarterback Tua Tagovailoa got loose for a 15 yarder in week seven, Eagles quarterback Jalen Hurts only one attempt for ten yards in week eight. Colts quarterback Matt Ryan getting 22 yards on two successful carries, and Falcons quarterback Marcus Mariota limited overall with 17 yards on three attempts. So not gaudy in total yardage, but just below league average in allowing successful scrambles.

To close, I wanted to share something outside of the success rates that Pittsburgh’s defense has done very well in comparison to the league: 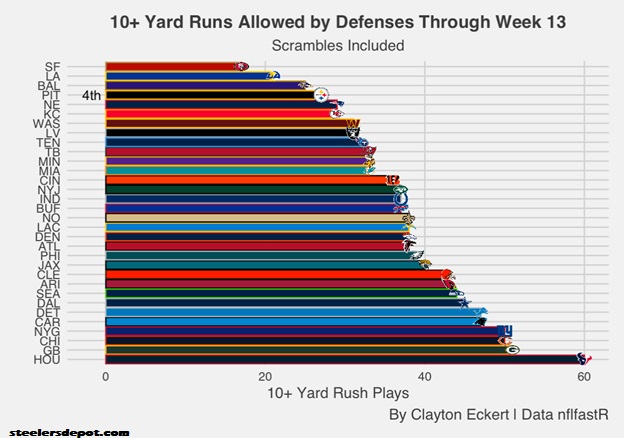 Very encouragingly, the Steelers have allowed only 27 runs of ten yards or more, which ranks fourth in the NFL! Seeing the Ravens ranked directly above is interesting heading into the matchup this week.

So, the Steelers defense has been strong on early downs, total success rates, in the first half, and in limiting long runs of 10+ yards. They have been up and down in the success rates by week, with recent performances being their lowest marks that is hopefully not the new trend to end the season, and here’s to hoping they can make improvements particularly on late downs and in the second half, along with successful runs against scrambling quarterbacks to end the season.

What are your thoughts of the Steelers 2022 run defense? How do you think Pittsburgh will close out the year against the strong rushing offenses on the horizon? Thanks for reading and let me know your thoughts in the comments!