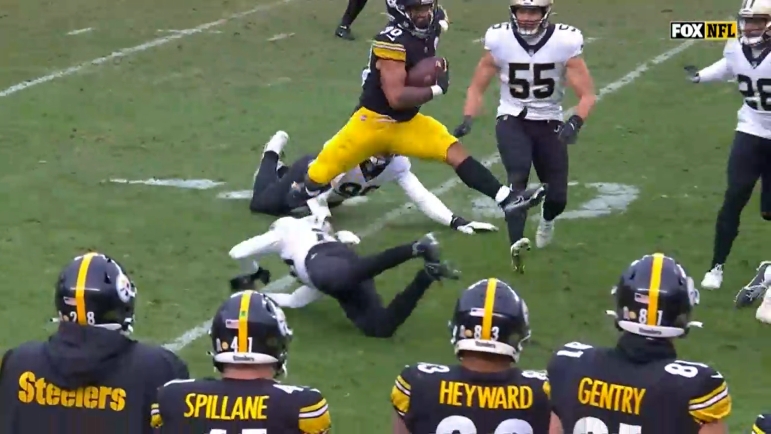 Question: How would running back Jaylen Warren look getting starter snaps for a full game?

Jaylen Warren’s rookie season and the response to it has been an interesting one. Undoubtedly he has done much that is thoroughly commendable and there is no doubt that he has proven himself to be an NFL-worthy player.

That said, there are some critiques that can be made. His run success rate could be better, particularly on 1st and 10 runs, which is pretty important. Did you know that Warren’s run success rate on first down this season is just 26.3%?

All of his first down runs have been on 1st and 10. A successful run on first down is deemed as any that picks up at least 40% of the necessary yardage, or at least four yards. He has picked up four or more yards on just five of 19 first-down carries. For comparison’s sake, Najee Harris has a 43% run success rate on first downs.

We should acknowledge that at least to some degree Warren’s successes have stemmed from situational usage. Second and third and long draw runs, for example, are more likely to pick up chunks of yardage, especially in situations where the defense is playing the sticks and willing to allow a gap to defend the back end.

That’s why I would be very interested to see what Warren would do with a full game’s worth of starter work. There is a chance that we see that next week with Harris nursing what is now being called an oblique injury.

Warren said that he has been cleared to go and practiced in full yesterday, so it appears that he is on track to play. He would start against the Atlanta Falcons if Harris is unable to go, though the Steelers would supplement him with Benny Snell Jr. and Anthony McFarland Jr. But, I would imagine he would get the lion’s share of snaps and touches.