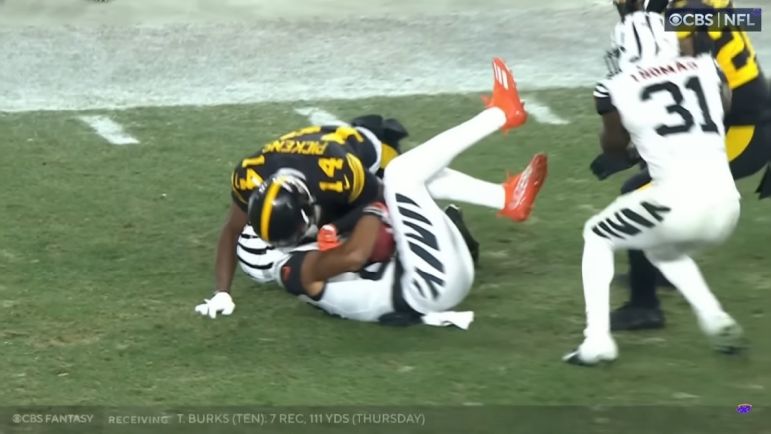 Wide receiver George Pickens wasn’t not be too concerned about his late hit that earned himself an ejection in the final seconds of Sunday’s loss against the Cincinnati Bengals. Evidently, neither is the league. Pickens was not fined by the NFL for his hit on WR Tyler Boyd on the Steelers’ last-second onside kick attempt in Week 11’s 37-30 loss. Pickens’ hit drew a penalty, ejection, but not a letter from the league.

That comes via the PPG’s Brian Batko, who was the first to tweet the news.

Steelers rookie WR George Pickens was not fined by the league for his ejection last week after this play at the end of the Bengals game, per source. He said Thursday there was nothing really his coaches had to tell him because it didn’t impact the result. pic.twitter.com/OEMMXxQhWV

Pittsburgh attempted the onside kick down following Najee Harris’ one-yard touchdown that made it a one-possession game. Boyd easily recovered with Pickens hitting him awfully late, predictably drawing a penalty. That was followed up by an ejection, the first of his career. Take a look at the moment.

Impossible to argue with the penalty and the fact Pickens wasn’t fined comes as a serious surprise given how fine-happy the league can be, especially when an ejection is involved. He might be the only player this season to be ejected and not hit in the wallet, too. So far, Pickens has enjoyed a solid rookie season as the Steelers’ big-play machine and until the final two minutes of the game, put in a strong performance against the Bengals, finishing the day with four receptions for 83 yards and a touchdown.

On the season, Pickens has 33 receptions for 453 yards and pair of receiving scores with a third end zone trip on the ground. His receptions and yards currently rank third on the time while his receiving touchdowns are tied for first place.