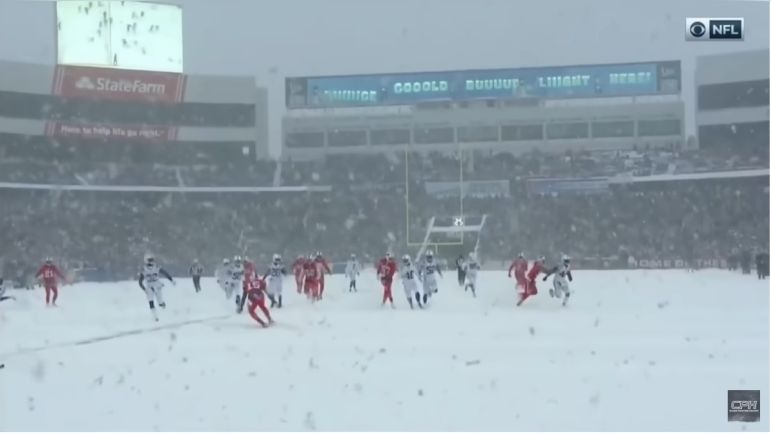 You won’t get to watch a winter wonderland this weekend. The NFL is moving Sunday’s game between the Cleveland Browns at the Buffalo Bills to Detroit due to an extreme snow forecast. That’s according to multiple reports that should soon be followed by an official announcement.

NFL source confirms to me Browns at Bills is being moved to Detroit.

A massive snowstorm is expected to roll off Lake Erie beginning tonight and lasting through Saturday with some projections calling for upwards of six feet of snow. Though it appears the storm will be out of the area by Sunday afternoon, there are obvious logistical and safety concerns getting personnel and fans to the game. Instead, the Bills and Browns will play on Detroit’s neutral site. The Lions are away this weekend playing the New York Giants.

It’s an important game for the 3-6 Browns as they try to cling onto playoff hopes with Deshaun Watson returning in just a few weeks. Cleveland got off to a 2-1 start but have dropped five of their last six, including getting blown out by the Miami Dolphins this past Sunday.

Buffalo is 6-3 on the year but losers of two straight, most recently a bizarre and wild OT defeat to the Minnesota Vikings this past weekend. QB Josh Allen is playing through an elbow injury while the Bills’ allowed a season-high 33 points to the Vikings.

Kickoff is expected to remain for 1 PM/EST.

UPDATE (4:32 PM): The NFL has officially announced the change.

Due to weather forecasted in Buffalo, Sunday’s game between the Browns and Bills has been moved to Ford Field in Detroit.