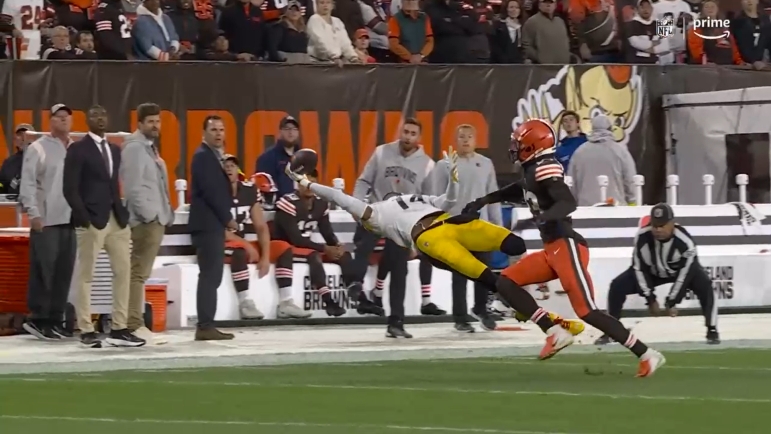 The Pittsburgh Steelers have reached the halfway point of the season. A 17-game season no longer splits evenly down the middle but with the team coming off a bye, this is as good a midway point as any. Though it’s been a frustrating and disappointing season, the “worst moments” list could be much longer, we’ll enter this Monday with a bit of positivity. Here are the top five individual moments/plays of the Steelers’ first half of 2022. Hopefully, there are more good things to talk about on the other side.

The undisputed top play of the season. Still arguably the best catch of the NFL’s entire season, Pickens made this sensational one-handed grab, somehow pulling the ball in over his shoulder while horizontal, for a 36-yard grab. Though it’s been inconsistent, Pickens has been Pittsburgh’s best downfield threat and one of its few sources of big plays. This one tops them all and shows the “freak” ability that got him drafted and makes him look like tremendous value in the second round.

The second play of the Steelers’ season, Fitzpatrick jumped Joe Burrow’s throw and made a house call for Pittsburgh’s first points of the season. It began Fitzpatrick’s great start to the season and showed why the Steelers – at the time – made him the league’s highest-paid safety. Fitzpatrick was dominant in the opener and his blocked extra point saved the game, a play that certainly could’ve cracked this list but narrowly missed.

Sticking with Week One. If it wasn’t for Pickens’ grab two weeks later, we’d still be talking about Johnson’s catch versus the Bengals. Underrated at the time and definitely overlooked now, Johnson went vertical with his right hand to somehow snare this sideline throw in overtime. Johnson’s hands may frustrate but he’s made some of the best catches fans have seen since Antonio Brown was dealt.

Perhaps this play would be discussed more had Chris Boswell made the game-winning field goal later in the drive. But in a vacuum, this was a special moment.

Though it came in a loss, Pickett’s best throw of the season came on fourth down in the Miami rain. With the game on the line, Pickett couldn’t have handed this throw to Pat Freiermuth better. A laser down the seam, around the linebacker, with Freiermuth making the solid grab fans have come to expect. The Steelers’ passing game was been more bad than good and Pickett’s been inconsistent but that was at least a “moment” that showed what Pickett could offer at his best.

Showing some love to special teams to round out the list. In an upset victory over the Tampa Bay Buccaneers, Sims got the second half started with an 89-yard kick return, the team’s longest runback since 2017. After a couple of ugly first-half returns, the Steelers adjusted and Sims found a crease in the middle and put Pittsburgh in immediate scoring range. Granted, the offense could only muster a field goal but in a two-point win, every point mattered. Plays like this from unsung heroes like Sims served as the catalyst to upsetting the Buccaneers on a day when the Steelers were dealing with a slew of starters.