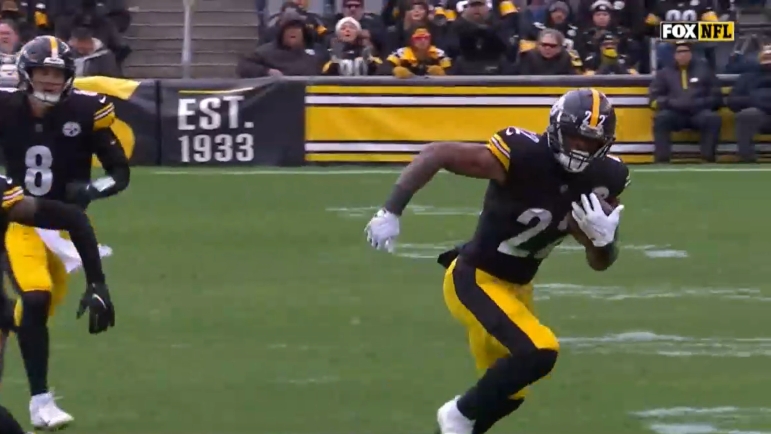 It took until Week 10 but the Pittsburgh Steelers’ run game broke out in a big way in Sunday’s win over the New Orleans Saints. The offense finished the day with 208 yards on the ground and it was far from a one-man show. Najee Harris, Jaylen Warren, Kenny Pickett, and a host of receivers got involved to give Pittsburgh their best rushing output in six years.

Speaking to reporters after the game, Mike Tomlin praises the collective effort to jumpstart the ground game.

“Quarterback mobility is a component of it,” he said via Steelers.com. “I thought Kenny did some good things with his legs. I thought the runners ran hard. I thought we came off the ball with some of the bigs up front…we’ll just keep building.”

Harris led the Steelers today with 99 yards, one shy of triple-digits but easily a season-best mark for him. He also had the team’s longest run of the day and of the season, a 36-yard angry run down left sideline. But six Steelers registered two or more carries. Pickett finished second on the day, scrambling for 51 yards and a QB sneak for a touchdown. Running back Jaylen Warren rushed for 37 yards and produced key plays in the pass game with his downhill, bowling ball mentality while George Pickens rushed for his first NFL touchdown for Pittsburgh’s first points of the day. Even fullback Derek Watt had a couple of key third-and-short conversions.

In total, Pittsburgh had four runs of 20+ yards in Sunday’s win. Coming into this game, their longest run of the season was just 19 yards.

Pittsburgh’s 208 yards rushing were the most they’ve had in a game since 2016. As Tomlin noted, the offensive line generated a consistent push and opened holes for the backs. Mason Cole and James Daniels in particular seemed to open lanes for the team’s backs.

The Steelers will look to carry that plan and success over to next Sunday’s AFC North matchup against the Cincinnati Bengals. Pittsburgh rushed for just 75 yards of offense in five quarters of play in their Week One meeting.