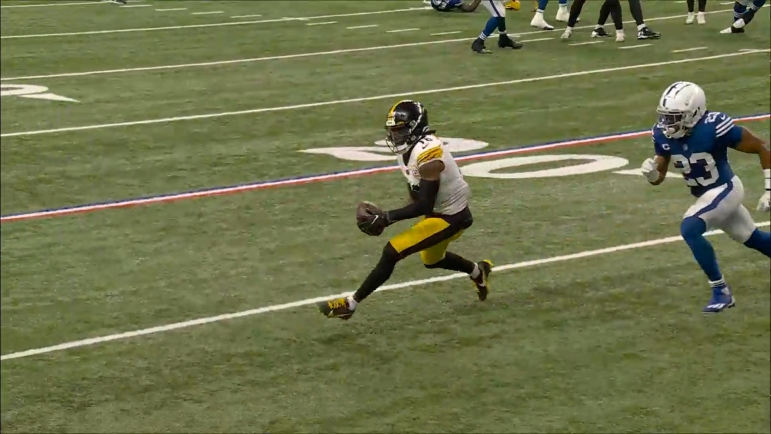 Pittsburgh Steelers wide receiver Diontae Johnson is not exactly having his most productive season as the offense transitions from Ben Roethlisberger at quarterback to Kenny Pickett, the rookie first-round draft pick out of Pittsburgh.

Whatever the reasons for it, the 2021 Pro Bowler just isn’t seeing the same number of targets he has grown accustomed to, either by volume or percentage. He did see eight targets on Monday night against the Indianapolis Colts, following two games in which he only saw five apiece.

Reporters have continually peppered the wide receiver with questions regarding his frustration level and what he’s doing to address it, and by and large, I believe he’s handled himself quite well with the media this season. But everybody knows he would like to get the ball more. Including his head coach.

“I’m sure he does” want more targets, he said during his pre-game press conference yesterday via the team’s website. “I’m sure every receiver in the National Football League does. He made the necessary plays, and we’re appreciative of his efforts. The target game, I’m not gonna play that. You can play that every week with every receiver. Everybody wants targets.”

That’s the simple truth of the matter, and the fact is that the Steelers only attempted 28 passes in their last outing. Nobody saw more targets in this go-around than Johnson’s eight. Fellow wide receiver George Pickens had six, and tight end Pat Freiermuth had four while wide receiver Steven Sims had three. Nobody else had more than two.

In fact, Pickett completed passes to a season-high 10 targets. The only skill position players on the night who did not catch a pass were tight end Connor Heyward and wide receiver Gunner Olszewski. Even Cody White, just elevated from the practice squad, and fullback Derek Watt caught a pass.

The thing is, there wouldn’t be nearly as much frustration over the course of the season if the Steelers had been winning more consistently. It’s easy to feel better about lower numbers when it’s still resulting in victories. Perhaps Pittsburgh is turning the corner in that regard.

It’s clear that as currently formulated, this is an offense made largely of nameless, gray faces. Yes, there are players with star potential, but right now everybody is just playing their part as the offense looks to build itself into something resembling a cohesive whole.

If that means staying patient while waiting for your opportunity to make your plays, then that’s what the situation calls for. I obviously can’t speak to what goes on behind the scenes, but I think the Steelers have done a much better job of doing that than some media outlets might like to portray it.