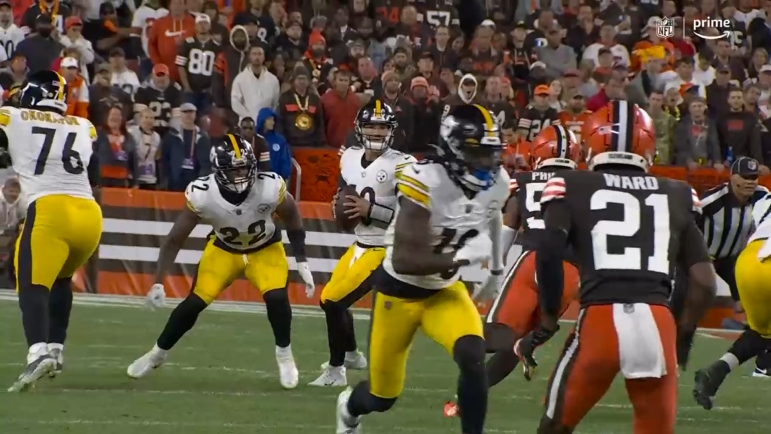 The Pittsburgh Steelers’ offensive line ranks near the top of the league in terms of pre-snap and procedural penalties. That includes what is no longer a league-leading six ineligible downfield pass penalties called against them, of which five were accepted. The Miami Dolphins now have seven such infractions, with five accepted.

Well, for one thing, it’s a point of emphasis for the officiating crews this year. It’s also largely a byproduct of the continued increase of things like RPO usage in offenses, which put linemen in a vulnerable position in terms of potentially being exposed downfield if a pass is thrown. And that’s not going away any time soon.

“I think that component of the game is here to stay”, head coach Mike Tomlin said of the use of RPOs and the need to adjust to how they’re officiated, via the team’s website. “I think that we all have to get in tune to what the officials want and what they’re looking at from an officiating standpoint. That’s obvious just by the nature of the number of calls that’s been made in this area, not only against us, but against everyone”.

There was an average of 1.44 such penalties accepted per team in all of 2021, which was the highest mark on record, but it’s already at 1.56 this year. And to be abundantly clear, this is a cumulative statistic, so it only goes up. By season’s end, the average team will have been penalized three times at this pace, a more than 100 percent increase.

While Tomlin is entirely right that it is his and the coaches’ and players’ job to learn to adapt and adjust to how the play is being officiated—with minor exceptions, a lineman may not be more than one yard downfield when a pass is thrown, but a lineman could be run-blocking on an RPO not knowing there is a pass—it does feel like an issue that won’t die easily.

If teams continue to run RPOs at a high rate, and there is every indication that they will, then something is going to have to give. The college rule allows three yards of downfield real estate for linemen. In time, there’s a good chance, I think, that we see an NFL rule change reflecting the new reality of NFL offenses with the use of RPOs. Believe it or not, Pittsburgh fans, but it’s not just a Steelers issue.