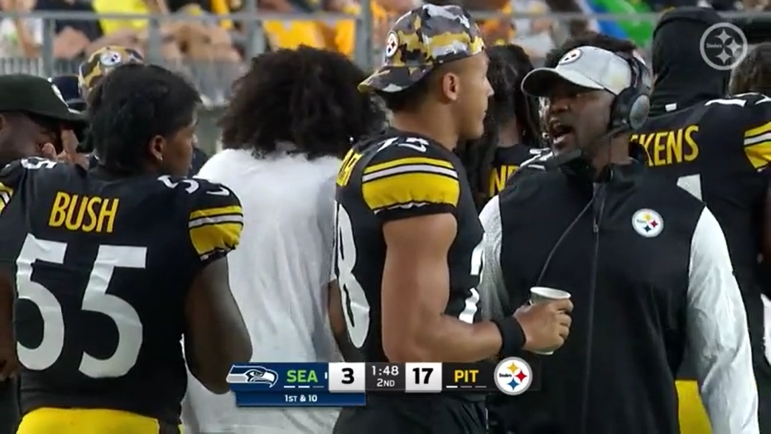 After a very underwhelming 2021 season, Pittsburgh Steelers linebacker Devin Bush has started to return to his pre-torn ACL form just a bit in 2022. Bush has 47 total tackles thus far, and outside linebacker T.J. Watt talked to the media today about Bush’s season and his relationship with senior defensive assistant and linebackers coach Brian Flores.

“It’s been fun to watch his and Flo’s relationship. They kind of butt heads at times, but other than that, they’re getting the best out of each other and that’s all you can really ask for. I think Dev’s playing really good football. He’s playing aggressive. He knows what he is doing, he’s very comfortable, very decisive out there,” Watt said in a video posted to Steelers.com.

Bush hasn’t been a standout, but he’s undoubtedly been better than he was last year. Instead of being flat-footed and shying away from contact, Bush is making plays at the line of scrimmage, taking on blockers and making the tackles he has to. He’s only accounted for one missed tackle all season, which is impressive considering how much he struggled with that area of his game last year.

Bush on the last year of his deal, and while I’d be surprised to see him in a Steelers uniform next year, if the team is able to get Bush to agree to the same of sort of contract they signed safety Terrell Edmunds to during the offseason, then the odds will increase. It also helps that Bush is playing alongside Myles Jack, who is a huge upgrade over what Joe Schobert provided the Steelers as a starting inside linebacker last season. Jack and Bush play off each other well, and the pairing has been one of the reasons why the Steelers are a top-ten defense against the run.

Bush gets a lot of hate for not living up to his draft status, as the Steelers moved up to take him 10th overall in the 2019 NFL Draft. Hindsight is 20/20, and while that’s not a move the Steelers would go back and make knowing what we now do about Bush, he’s been a solid piece of the team’s defense this year. He’s not a game-changer or an All-Pro, but he’s shown that he can be a decent starter for a team that hasn’t had the best luck at the inside linebacker position ever since Ryan Shazier’s career-ending injury. The addition of Flores surely has contributed to Bush’s bounceback year, as Flores is a talented defensive mind who led really good defenses that lacked star power during his time as the New England Patriots’ defensive coordinator.

Let’s see if Bush can keep up his level of performance throughout the year and what his future holds in Pittsburgh.