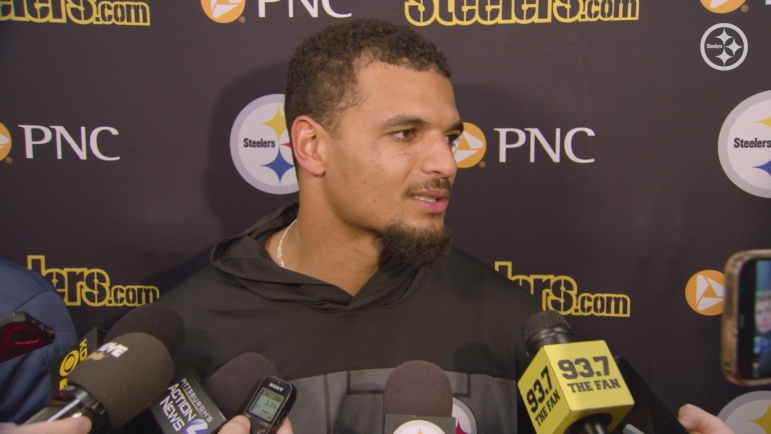 The Pittsburgh Steelers made the decision on Friday to leave safety Minkah Fitzpatrick off the game status list at the end of the week of practices, an indication that they expect him to play just a week after having an emergency appendectomy.

But it’s still not guaranteed that he will play. It’s not even guaranteed that they won’t update the injury report with a status designation for Fitzpatrick. I think almost everybody expected him to be listed as Questionable for the game and I wouldn’t be at all surprised if that does happen.

But for now all we can do is assume that he’s going to play. According to teammate T.J. Watt, it does sound like he’s going to try to play. He seemed more even-toned on Thursday, but he himself said that he’ll see how he feels on Sunday.

“I don’t know, man, Minkah’s a stubborn guy. He does kind of what he wants and we all just kind of fall in line”, Watt said on Friday via the team’s website through a link currently dead for unknown reasons as of this writing. “I’m happy that he’s gonna try to go, and hopefully he’s able to go. He’s a dynamic player for us and just and overall tone-setter, so if he can play, I’ll be excited to have him”.

Teammates had fun with Fitzpatrick this past week, with Cameron Heyward saying that they couldn’t outwardly tell he was dealing with a budding appendix issue because he was always grumpy anyway so they couldn’t tell the difference.

He certainly brings a level of grumpiness to the playing field as it concerns opposing quarterbacks. Even though they have actually won the two games he hasn’t started this season (of the three in total they’ve won), is return will be a most welcome one.

Watt’s comment about Fitzpatrick doing what he wants and everyone else falling in line works multiple ways. First, it speaks to the fact that it’s ultimately going to be up to him whether or not he gets on the field and plays.

Second, it also speaks to the way that he plays. Not that he is a chronic freelancer—nor was Troy Polamalu for that matter, just in case that comes up—but they know that he is a playmaker and that when he sees something, he’s going to attack it, and they’re going to have to cover it.

They have managed to cover his absences well thus far, with Tre Norwood starting in the win over the Tampa Bay Buccaneers and then Damontae Kazee coming back from the Reserve/Injured List this past week to start and play every snap on Sunday in the win over the New Orleans Saints.

but Watt said it best in calling him a dynamic player, one who helps set the tone for the entire unit. He’s not a player that you just replace in the sense of being able to replicate everything that he brings to the table. That’s why he’s accommodated the way he is, after all.