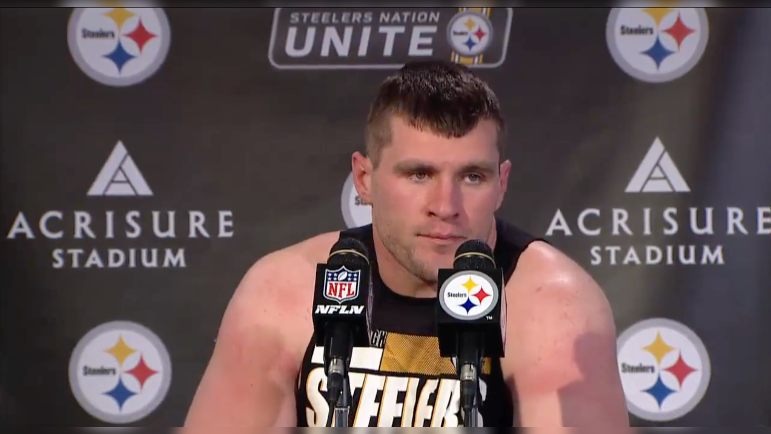 It was a little bit of deja vu for the Pittsburgh Steelers and star outside linebacker T.J. Watt on Sunday evening inside Acrisure Stadium against Joe Burrow and the Cincinnati Bengals — at least for a fleeting moment.

Midway through the third quarter, Watt — who had half a sack against Burrow with the Steelers trailing 24-20 — found a way to get his hands on the football once again on a throw from Burrow in exactly the same way he did in the Week 1 overtime win.

Only a player like T.J. Watt can make a play like this twice in a season. pic.twitter.com/DlILSr4It1

Opening up the season, Watt — coming off of his first career Defensive Player of the Year Award, leaped to knock down a Burrow pass at the line of scrimmage. Instead of batting the ball down, Watt got two hands on it for the interception. On Sunday, he did it again, this time with a degree of difficulty to it.

Burrow was intending to throw to Tyler Boyd on the slant route over the middle, but Watt, who was unable to win quickly on his pass rush, got into the throwing lane and got two hands on the football while being shoved to the ground by right tackle La’El Collins, recording the interception.

The pick was his second of the year in just 11 quarters of action and gave the Steelers’ offense great field position at the Cincinnati 21 yard line.

Unfortunately, he Steelers’ offense was unable to take advantage of it leading to a 34-yard field goal from Matthew Wright.

Following a disappointing 37-30 loss to the Bengals to drop the Steelers to 3-7 on the season, Watt discussed the play with reporters post-game, stating that it happens a lot in training camp and it’s just a case of him searching for ways to make a play even when he can’t get to the quarterback.

“It happens a lot in training camp throughout practice,” Watt said to reporters following the loss, according to the Steelers Twitter page. “I mean, it’s something that I’m constantly trying to work on and gonna always try to make a play, even though I can’t get the quarterback all the time.

“I just happen to come down with it.”

Watt’s pick ignited the home crowd at Acrisure Stadium following a Bengals touchdown drive to take a 24-20 lead and was the second interception of the game thrown by Burrow and sixth of the season against the Steelers.

With the short field, the Steelers looked like they were going to take advantage and go on top of the Bengals once again, but to Cincinnati’s credit they buckled down and held the Steelers to a field goal, turning the game.

That doesn’t take anything away from the weight and difficulty of Watt’s play. Falling down while being shoved by a lineman and getting your hands on a hard-thrown football just a few yards away is incredibly difficult. Watt’s done it twice now and continues to defy expectations and make the impossible look routine.

Watt’s play was just another example of how spectacular the outside linebacker is whenever he’s on the field. He’s a rare talent, one that affects the play on every single snap. The pick was his sixth of his career and the 35 pass defensed of his career. Remarkable numbers for a pass rushing outside linebacker.