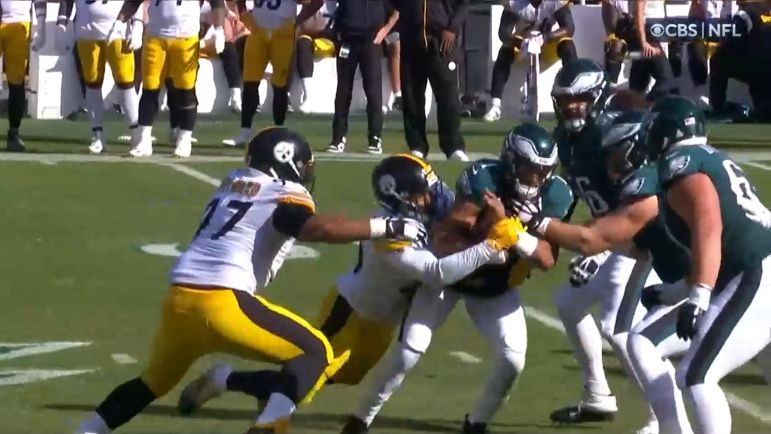 Without the otherworldly abilities of one Trent Jordan Watt on the defensive side of the football, opposing quarterbacks have been relatively comfortable and kept upright since Week 1 against the Pittsburgh Steelers.

Granted, third-year outside linebacker Alex Highsmith leads the Steelers in sacks with 6.5 and once led the league with those numbers, but he’s fallen off a bit, as has Cameron Heyward without Watt opposite him.

The pass rush has been mostly non-existent this season, but it has shown signs of life in two of the last three weeks against the Tampa Bay Buccaneers and Philadelphia Eagles, affecting Tom Brady in a major way in the 20-18 win and sacking Jalen Hurts three times in Week 8, albeit in a 35-13 loss.

Most sacks by a Steeler through six games of a season:

Breakout year for Highsmith. Great company to be in. He's in line to get paid next summer. #Steelers

The return of Watt should provide the Steelers — who have just 15 sacks on the season (seven in Week 1 with Watt in the lineup) — with a significant boost from a pass rush standpoint. It will go beyond the play of Watt though, according to head coach Mike Tomlin, who spoke on the recent play of the pass rush Tuesday during his weekly media availability.

“I think it remains to be seen [if the pass rush is coming around]. Obviously we’re optimistic,” Tomlin stated to reporters Tuesday, according to video via the Steelers’ official YouTube page. “I think it goes beyond Watt. I think it’s availability of guys like Larry Ogunjobi and the development of new guys like Malik Reed, who’s not new to the game of football at this level, but obviously new to us. And so, gaining that understanding of what we’re asking them to do, and how to work as a collective is a component of it for sure.”

As @Steelersdepot pointed out yesterday, Larry Ogunjobi had some great rushes against Tampa Bay. Watch this hump move throw away the center. Not the first time he's used it this year either. Grown man strength. #Steelers pic.twitter.com/yfmrlTIJvK

As of late, it feels like the pass rush is starting to gain that understanding of what’s being asked of them and is working as a collective when it comes to getting to the quarterback on a consistent basis. Make no mistake about it though: Watt’s return will give the pass rush a significant boost, one that could see the Steelers get back to their high level of play in that aspect.

That doesn’t seem completely out of the realm of possibilities, especially with Watt back in the fold, but it will be a tall task overall.

Good news is, Watt is nearing his return, and the pass rush without him was just starting to round into form some. There are reasons to be optimistic about an area of the defense that is starting to play well in recent weeks.