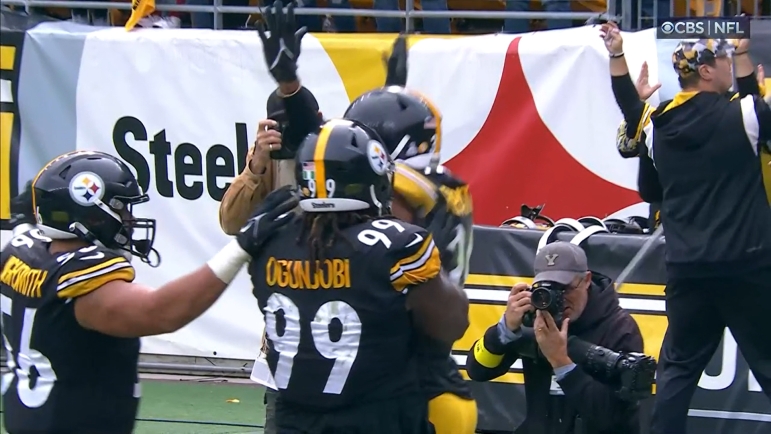 The Pittsburgh Steelers are coming off of a win this past Sunday against the New Orleans Saints. Each of their previous two wins on the season were followed by multiple losses, which is why they find themselves sitting at 3-6 with eight games left to play. But the only way to look is forward, and that’s the mindset defensive lineman Larry Ogunjobi is bringing to the second half of the season, with no illusions of the challenge they face.

“We know the kind of situation we’re in. Everybody sees the record”, he told Aditi Kinkhabwala last evening during an interview on 93.7 The Fan. But he stressed even an intrinsic motivation to soldier on regardless of what the odds say of advancing. “You shouldn’t ever throw in the towel. You shouldn’t ever not want to do what you do. I love football. I love playing, I love competing. So regardless of the record, it’s like, I play to win”.

Ogunjobi has been a good luck charm for AFC North teams in recent years. He was a part of the first Cleveland Browns team in 2020 to win a playoff game since 1994. A year later, last season, he helped the Cincinnati Bengals win their first playoff game since the 1990 season. He still hopes to help Pittsburgh win its first since 2016, but knows it’s a collective urgency that’s needed, and he’s seeing that.

“I think that guys just realized, ‘Yo, we’ve got to win this game’,” he told Kinkhabwala. “We’re coming off a bye, the only way we can fix the situation is just stacking. It’s not like looking at the big picture so far at the end, but it’s really just taking it one day at a time.”

“How do you eat an elephant? Piece by piece.”

That’s a hell of an analogy, and amazingly one that I’ve actually heard before, but boy is it appropriate. The Steelers certainly have an elephant sitting on their plate now. Even if they can’t catch the 6-3 AFC North-leading Baltimore Ravens, the road to a Wildcard spot is scarcely any easier.

Right now, the New York Jets and Buffalo Bills occupy the top two Wildcard seeds sitting at 6-3. They have already lost to both teams, so that doesn’t help, either. The New England Patriots right now are positioned in the seventh seed at 5-4, which is, yet again, another team to whom they have already lost this year, making tiebreakers a null point unless at least three teams are involved.

And then there are the Los Angeles Chargers and the Cincinnati Bengals both sitting at 5-4 but certainly with the potential to go on a run. The Bengals, after all, were in the Super Bowl just a year ago, and the Chargers have one of the top passing offenses in the league.

The only way to swallow the elephant is not whole, but by a little bit at a time. I’m not sure there’s even a snake in the world that could get a whole elephant down. The next bite of the elephant this week will come in the form of Bengals, once a pack with which Ogunjobi hunted a year ago, but which must now be his prey.