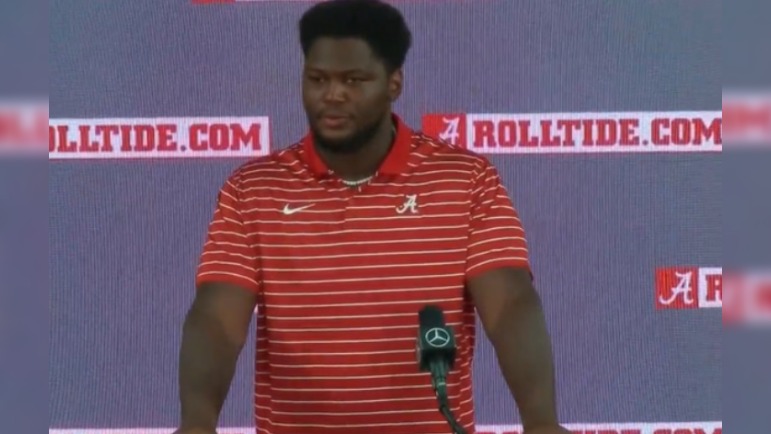 The Crimson Tide defeated the Ole Miss Rebels in a close one in Oxford, winning 30-24. The Alabama defense was disruptive in this one, picking up three sacks and seven TFLs in this contest. DL #47 Byron Young had himself a game for the Bama defensive front, racking up 11 total stops (six solo), two TFLs, two sacks, and a PBU.

When going back through the tape, you notice several highs and lows throughout Young’s performance that don’t stick out in the box score. His final stat line was impressive, but there are some issues that stick out on tape. One of those issues is the lack of lateral quickness and awareness when he arrives on the scene to make the tackle. Here on this option play, we see Young split the difference between the QB and RB but stops his feet instead of converging on the mesh point to make the runner bounce it more to the outside. Instead, Young just stares down the QB as the runner takes off for the first down.

Another issue that shows up on Young’s tape is the tendency to leave his feet as a tackler instead of running through the ballcarrier on contact. Young is a big, strong defensive lineman, but there are instances like this play where he has a clean shot on the ballcarrier, but he falls off the tackle attempt as he doesn’t wrap up and falls to the ground.

While Young didn’t have a perfect performance from an execution standpoint, he did a great job overall in terms of getting penetration into the backfield and getting pressure on the QB. On this rep we see Young fight across the face of the RT, squeezing through the LOS to take down the QB on the keeper for a short gain.

While standing 6’3, 292lb, Young plays with a lot of effort in pursuit of the football, having the motor to play chase from sideline to sideline. Watch on this rep where Young gets off the block and runs down the RB on the quick pitch to the right, meeting his teammate #10 Henry To’oTo’o at the ballcarrier for a hit that knocks the ball out, giving Bama a chance to score before the half.

Even when Young doesn’t get home as a pass rusher, he still can make an impact by getting his hands up in passing lanes. Young is very cognizant of trying to bat down passes if the rush can’t get there in time and has some notable success batting down ball at the LOS. Young gets two separate batted passes in this contest, keeping his eyes on the QB and gets a hand on the ball to force the incomplete pass.

Byron Young picked up two sacks in this contest, but the quality of both sacks was different in the context of each individual play. The first sack came more off effort than on execution as a pass rusher as the play starts to break down and QB #2 Jaxson Dart flees the pocket. Young gets off his block and takes down Dart right before the LOS for the sack, being more of the clean-up variety than a high-quality QB takedown.

Still, the defense will take sacks however they can get them, Young included. We saw the hand usage as well as the deployment you like to see from a traditional IDL from a pass rush perspective. There were plenty of occasions throughout this game where Young lined up outside either head-up on the OT or just outside shade like a DE. On this rep, we see Young rush against the RT, using his hands to control the blocker’s punch before he hits the outside swim move and pressure Dart as he releases the pass which goes out of bounds.

Here’s another example where Young swims off the block as he works laterally down the LOS into the gap where Dart is trying to run to on the QB draw, sticking him behind the LOS for a loss of yardage.

Young’s second sack of the game came on this impressive two-play sequence at the end of the game where the Bama defense kept Ole Miss out of the end zone. On the first play, we see Young long arm the center at the LOS on the snap then swim over his right shoulder into the pocket to take down the QB who attempts to get away. The very next play, Young walks back the LG as the pocket collapses getting off the block in-time to bring down Dart for the key sack to take the Rebels to fourth-and-long.

Overall, it was a strong performance for Byron Young who is starting to garner more attention amidst a talented Alabama defense with several NFL draft prospects. The 6’3, 292lb senior has been a key cog on the defensive line for several seasons now for the Tide and is coming into his own in his senior season, using his strength and high motor to work off blocks and pursue the ballcarrier. He has some physical limitations as an athlete and doesn’t possess elite measurables, but he is an experienced defender that has improved every season, showing a pass rush skill set as well as the capability of being scheme-diverse while playing up-and-down the defensive line.

Young figures to be a mid-to-late round option for teams who are looking for an experienced interior defender that can rotate in and provide a viable pass rush. He may not carry the same lofty projections as the top DL prospects in this draft class, but he should be a steady contributor for years to come if he finds a home on a team’s DL in the league.