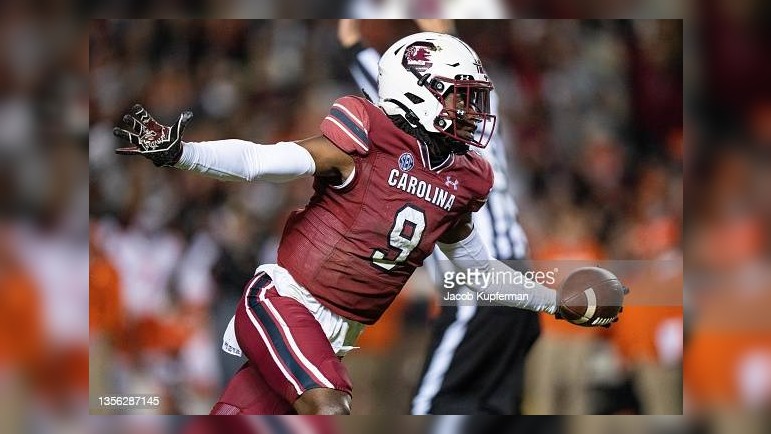 The historic rivalry between Ohio State and Michigan on the last game of the regular season sees the next chapter this Saturday as the two Top-Five programs clash on the gridiron. The winner will set themselves up for the Big Ten Championship game.

The Wolverines are in the running to win the Joe Moore Award in back-to-back seasons thanks in-part to the addition of C #55 Olusegun Oluwatimi via transfer from Virginia. The 6’3, 307 redshirt senior transferred from Virginia this spring and started 35 games at the pivot position. He has helped stabilize and talented Michigan offensive line, having fluidity in pass protection to protect the interior while moving DL off their spot in the Wolverines’ dynamic rushing attack. RB Blake Corum can thank Olusegun Oluwatimi and the rest of his OL for a breakout 2022 season as the center can pull and climb to the second level to pick up defenders, giving RBs plenty of open room to run.

The Buckeyes have a pair of NFL-caliber tackles, in OT #77 Paris Johnson Jr & OT #79 Dawand Jones. The 6’6, 310lb Johnson moved to the blindside after seeing action at guard before this season and has fared well, having the athleticism and size scouts look for in NFL OTs. He plays with a lot of effort in the run and has held his own quite well on the edge in pass protection.

Jones is a giant at RT, standing 6’8, 359lb. Jones struggled last season with his technique and consistency to warrant Round One consideration. However, Jones has rebounded this season, representing himself better in pass protection while being one of the best run blockers in the country. Both tackles will be put to the test against an athletic Nittnay Lions defensive front, hoping to keep C.J. Stroud clean and stay unbeaten on the season.

Clemson and South Carolina renew their annual rivalry Saturday morning in Death Valley with the Gamecocks looking to play the upset against after knocking off Tennessee last week in a barn burner.

For South Carolina, the headliner draft prospect is CB #9 Cam Smith. The 6’0, 188lb redshirt junior has been touted as one of the top CB prospects in the 2023 draft class, having the length, ball skills, and athleticism that projects well to the NFL as a prototypical boundary cover corner. He picked off three passes and deflected another 11 last season while also showing willingness to get in on the action as a run defender. He will be tested against a Georgia offense that has plenty of pass catching weapons, making Saturday’s game critical for his stock should he represent himself well.

Cam Smith has that dawg in him 👀

Smith is currently my second ranked CB eligible for the 2023 NFL Draft. pic.twitter.com/oZG0ZvSPw9

Clemson has a stacked defensive front featuring the likes of Myles Murphy and Bryan Bresee, but my eyes will be directed toward DL #13 Tyler Davis. The 6’2, 300lb senior may not have the measurables or freaky athleticism that teammate Bryan Bresee or Myles Murphy have, but Davis is a strong, stout defender in the middle that plays with great effort against the run and can generate a pass rush thanks to his leverage and motor. Built in a similar mold to former Clemson DL Grady Jarrett, Davis should be a name to watch throughout the pre-draft process as a potential mid-round value selection.

The Iron Bowl takes place in Tuscaloosa this Saturday afternoon in what should be must-watch TV in the newest edition of this historic rivalry between the Auburn Tigers and the Alabama Crimson Tide.

For the Tigers, EDGE #29 Derick Hall is a name that flashed last season with 12 ½ tackles for loss and nine sacks. He is an explosive athlete off the edge that can be a handful for most OTs he will face thanks to his good get off, speed around the edge, and relentless pursuit of the passer. Auburn will line him up on the edge as well as off-ball and in the gap to get him advantageous matchups against guards and centers that he can easily defeat with speed. Hall has registered 6.5 sacks and two forced fumbles this season and will look to add to that total as he tries to recreate the night he had last season against the Crimson Tide.

#Auburn EDGE/OLB Derick Hall (6-3, 256, Sr.) had himself a day vs. Mississippi St. Showing off his blend of bend, power, and finishing ability. pic.twitter.com/Uiw4HR9Obx

Alabama has several notable defensive players who are being scouted as NFL prospects, but my eyes will be on CB #7 Eli Ricks in this matchup. Ricks has the size and length you want in a press man corner on the outside, standing 6’2, 190lb with long arms. He is physical with receivers at the catch point and had a fantastic freshman season with LSU in 2020, picking off four passes and returned two for TDs.

His impact fell off in 2021, prompting the switch from LSU to the Crimson Tide as a transfer. Ricks lack ideal quickness and can struggle with crisp route runners, leading to some inconsistencies this season. Still, he is a talented prospect who could be a top 50 draft pick this spring with good testing and some more splash on tape.

The Fighting Irish of Notre Dame go out west to battle the USC Trojans in what should be a stellar top 15 matchup.

The Fighting Irish have come on strong down the stretch of the 2022 season thanks to the leadership and example set by players like IOL #55 Jarrett Patterson. The 6’4, 310lb redshirt senior is a four-year starter and team captain, having started 34 games at center but has moved to guard in 2022 after missing time in spring ball due to a torn pec that he has since fully recovered from. He has excelled in his transition outside from the pivot, showcasing a strong anchor in pass protection along with the size and strength to get a push up the middle in the running game.

His athletic upside may be capped, but Patterson is one of the steadiest, most consistent IOL in college football and will look to help ND upset Clemson once again at home like they did two seasons ago.

The Trojans are having their best season in years thanks to a dynamic offense full of NFL talent as well as a defense where DL #49 Tuli Tuipulotu has stolen the show. The 6’4, 290lb junior currently is tied for the lead the nation in sacks (11.5) and is second nationally in tackles for a loss (19) Tuipulotu will likely see Patterson a fair amount in this game, presenting him with an ideal NFL-caliber matchup. Still, Tuipulotu moves up and down the LOS, rushing from head up on the guard to outside of the offensive tackle.

While a skilled pass rusher, Tuipulotu’s ability as a run defender will be challenged in this contest as the Irish look to run the ball down the Trojans’ throats, calling for him to be a well-rounded player Saturday night.

The Huskies and the Cougars square off in Pullman Saturday night in a battle for the Apple Cup.

Washington has several pass rushers who get after the QB with DE #58 Zion Tupuola-Fetui being one to keep an eye on. Tupuola-Fetui flashed impressive pass rush talent in 2020, racking up seven sacks in three games. However, he suffered a torn Achilles, ending his season abruptly. He returned in 2021 and played in seven games, making less of an impact than the previous season, but proved to be on the right track post-injury. He now comes into 2022 as a fifth-year junior at 6’4, 260lb and has posted 3.5 sacks and a forced fumble. A strong finish to the season could prompt a move to the next level where more time removed from the injury could help Tupuola-Fetui regain his form.

The Cougars have a defensive stud of their own in LB #1 Daiyan Henley. The Nevada transfer decided to move to the PAC 12 in his final year as a redshirt senior and has been a playmaker all over the field for Washington State, recording 102 total stops, four sacks, two forced fumbles, two fumble recoveries, and an INT. Henley doesn’t have impressive size (6’2, 232lb), but is big enough to hold his own against the run, having great effort in pursuit.

He also works well in space when asked to work laterally as well as in coverage, picking off four pass last season. Henley figures to be a Day Two of early Day Three selection that should provide good depth at worst and potentially a capable starter at off-ball LB.