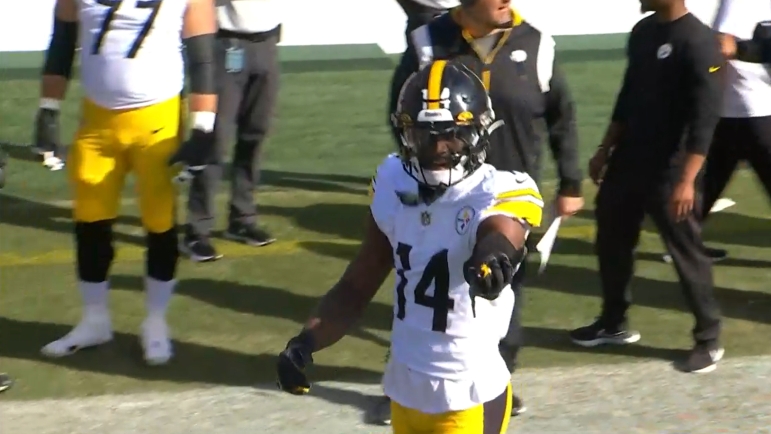 Pickett took a beating in this game so you have to admire his toughness. He took a lot of hits. His overall performance was subpar and in this game the offense looked much like last years. Too many short passes and not enough downfield production from the offense.

The mental processing part of the game is still a work in progress. There were several plays were he had better options that could have been big gainers. He wasn’t blitzed often but was constantly under pressure and two of those six sacks came against the blitz. He was 7 of 9 on play action plays overall. However, three of those were wiped out by offensive penalties costing the team 32 yards.

He did a solid job with his legs to create yards on scrambles. Turnovers were an issue again. He added two more: one on a sack fumble and the other on an interception in the red zone. It was another subpar day for the offense overall. Pickett is dealing with a lot right now learning on the job. Let’s hope the game starts to slow down a bit more for him.

Stop me if you’ve heard this before. Pickens did not receive a target until mid-way into the second quarter. He had one thrown his way earlier in the game but it was a throw away, way over his head and out of bounds. The lack of effort to get him involved earlier in the games is disturbing.

His route usage was fairly diverse. The most popular routes were Go/Fade (9), Comeback (6), Dig (5) and Quick In/Out (4 each). He was able to get one defensive pass interference call on a Curl route.

His targets are easy to describe this week because they were all basically the same play. He ran a go route and Pickett tossed a back shoulder throw on all three. The first was along the right sideline and despite a great effort he couldn’t get his feet inbounds. The second target was down the left sideline where he was called for offensive pass interference. The third rep he had the defender beat over the top but Pickett through it back shoulder. The ball fell out after he hit the ground and should have been reviewed. There was also a ball his way on a Stutter and Go but was thrown way too deep.

The lone criticism I have is there were several routes “run” at less than full speed. There wasn’t much effort and maybe he knew there was a low chance of the ball coming his way. He still needs to play at full speed.

Heyward saw action on seven offensive plays three of which were running plays. The first was a quarterback sneak. The second play he was lined up on the left side and the player who was lined up across from him made the tackle unfortunately. I don’t know what his assignment was but he went to the second level to block the safety. The third run was a draw play where he made a nice block on linebacker coming on a blitz.

On the passing plays he was not targeted but was open three of them. He ran two Curls, a Dig and a Seam route.

He had his first multi-tackle game as a pro. Late in the second quarter, he combined to make the tackle on a kickoff. He followed that with a solo tackle on the opening kickoff of the second half.

This is a nice pick up of the blitzing linebacker by Heyward on the draw play.

Warren had a productive day totaling 75 yards on 9 touches. He led the team in rushing but some of that production was situational. One thing is for certain. He can produce extra yards after he gets the ball. He is a “get it and go” runner. No dancing for him.

In the running game, he was given a lot of draw plays and they were effective. His first carry was a draw that produced 12 yards. Second carry could have been a good gain and possible score but a missed block on the outside prevented that. His third carry was an inside Zone run that was not blocked well. The next was another draw that gained 4 yards with all of those coming after contact. Run number five was the longest. A 19 yard run where he avoided three would be tacklers along the way. The final run was yet another draw with this one gaining three again with those yards after contact.

As a receiver, he is blossoming before our eyes and can create after the catch. The first target was a Screen pass where he used patience to set up and use his block with 15 yards after the catch. Pass number two was a Swing pass to the right caught six yards behind the line of scrimmage. He turned that into a 15 yard gain. Again using the no nonsense, get downfield quickly philosophy. His final catch was on a Stab route over the middle where he was hit immediately.

Early in the game, there was a blitz he didn’t pick up and it ended up in a sack. The good news is they ran a similar blitz later in the game and he picked it up. His tackle came not on special teams but on offense. He made the tackle on the interception thrown by Pickett.

Here is Warren against the blitz. He doesn’t read the first one but when Philly ran it again he was able to get hit on the looper.

Congratulations to Sciba earning his first NFL action filling in for Chris Boswell this week.

He was two for two on field goal attempts. The first was his longest of 38 yards. The second kick was a 29 yard chip shot. He had four kickoffs in the game. Three were short of the goal line and were all returnable. They averaged 22.3 yards per return. He also had one kickoff go out of bounds which was unfortunate.