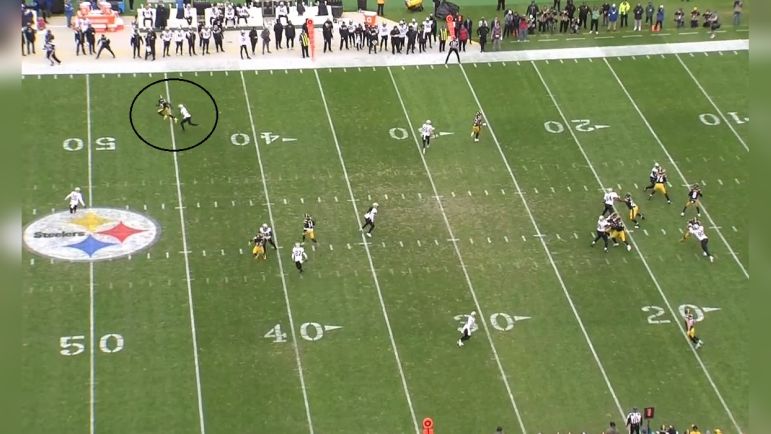 While Ben Roethlisberger said Kenny Pickett played well enough Sunday against the New Orleans Saints, he says Pickett’s first mistake came on the very first play of the game. In another episode of Roethlisberger’s Footbahlin podcast, this time joined by KDKA’s Bob Pompeani, Roethlisberger broke down the play that Pickett missed a 75-yard TD.

“The first play of the game, he had Diontae Johnson for a 75-yard touchdown,” Roethlisberger said. “Diontae Johnson on the right side, he had a go-ball. And he tried to hit Pat on the crosser. If he hits that and completes that, all of a sudden we’re not talking about running the ball. We’re talking about them taking shots down the field.”

As always, let’s get into the tape to see exactly what Roethlisberger is discussing. Pittsburgh came out aggressive with vertical routes and deep crossers on the first play of the game. One minor error in Roethlisberger’s critique is Pickett was trying to hit WR George Pickens – not TE Pat Freiermuth – on the crosser. But from the aerial view, top of the screen, you can see Johnson 1v1 against the corner with Johnson stacking down the field.

Instead of targeting Johnson, he looks for Pickens and throw well behind him and incomplete. It’s hard to fault Pickett who had Pickens wide open out-leveraging the corner across the field. If this pass is incomplete, it’s at least a 30 yard gain. You can even see the reaction of center Mason Cole below, hands over his head knowing how costly that miss was.

While it’s easy to sit back and talk about what reads a quarterback should’ve made, Roethlisberger’s resume obviously gives him plenty of clout to speak into the moment, though he admitted he wasn’t exactly sure what the call or progression was.

As Roethlisberger notes, sometimes quarterbacks will check for a 1v1 matchup pre and immediately post-snap as the “progression” before the actual read. If they like the matchup, they can hit it. If not, they can work the progression. That often occurs in 3×1 situations where a receiver is isolated backside, moments that made the Roethlisberger to Antonio Brown connection so great.

Roethlisberger said even if the pass was incomplete, a deep shot out of the gate helps plant the seed in the Saints’ mind to respect the vertical throw and could change the way they play the rest of the game.

Still, it’s hard to fault Pickett for his decision on the play, though the throw itself was one of the worst he had on the day. Roethlisberger went on to note it wasn’t the only time Pickett missed Johnson on the afternoon.

“He missed Diontae on a deep crosser, too.”

That’s referring to an incompletion Pickett had later in the game. Here, he throws to a heavily-covered Freiermuth on a crosser to the bottom, not seeing the underneath linebacker “ROBOT” the crosser and match it downfield. To the top, Johnson again has leverage and you can see him put his hand up mid-route and then react to the ball not being thrown his way.

Kenny Pickett poor read off playaction. Doesn't see LB dropping to ROBOT Pat Freiermuth on the crosser. Ugly throw that had no chance of being completed.

While Roethlisberger’s critique sounds harsh, he praised Pickett for his mobility and ability to scramble and gain yards with his legs. Roethlisberger certainly has defended and applauded Pickett at appropriate times this season. But here, we can match Ben’s words with the tape and get a view into a Hall of Famer’s mindset and how he saw the game.