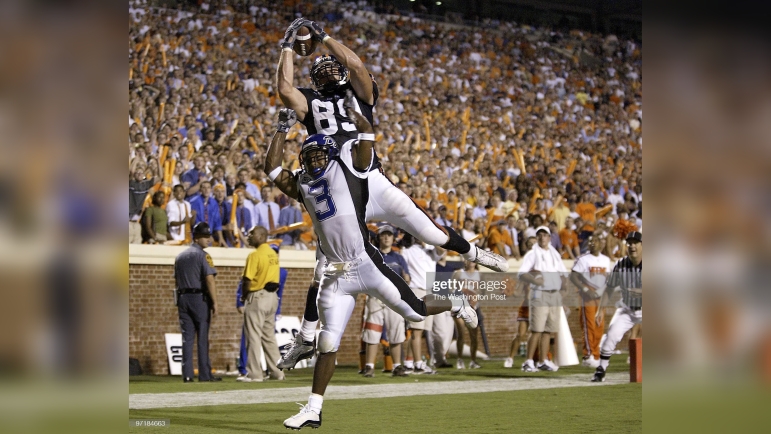 He was the starting quarterback for the Honaker Tigers back during the turn of the century in western Virginia. He even earned AP Player of the Year honors as a senior in 2000 and was the All-Southwest Virginia first-team starter at the position, setting school records and being recruited to play quarterback for the Virginia Cavaliers.

Heath Miller would be drafted in the first round four years later by the Pittsburgh Steelers—as a tight end. How did he go from a star high school quarterback to a first-round tight end catching his college balls from Matt Schaub?

The man (and every other subsequent Steelers tight end) they call HEEEATH was officially inducted into the Steelers’ Hall of Honor prior to yesterday’s victory over the New Orleans Saints. He credited former Virginia graduate assistant coach Andy Heck for believing in him during his inauguration speech—just not at the position he was recruited to play.

“Sometimes in life, people see more in you than you see in yourself, and for me that guy was coach Andy Heck”, he said via the team’s YouTube channel. “When I was a college quarterback, Coach Heck would tell me every day, ‘You’re going to be a great tight end’”.

That line drew a good laugh, as it should. He’s certainly not the first NFL player to recognize that they would not be able to make it as a quarterback and would have to change positions. He’s not even the only Steelers tight end. Current number two Zach Gentry was recruited to Michigan as a quarterback. Wide receiver Antwaan Randle El, however, is the Steelers’ best-known example.

Miller had to redshirt his freshman year after it was agreed that he would transition to tight end, mentioning how he ran scout team reps that season at the position. “I knew that he was sincere”, he said of Heck, “because he would spend extra hours with me every week in meetings teaching me how to play the position, so Coach Heck, thank you for everything”.

Heck is a former first-round offensive lineman who is currently the offensive line coach for the Kansas City Chiefs. He spent three years at Virginia as a graduate assistant fresh off of a 12-year NFL career, which just so happened to be Miller’s first three years there (2001-2003). You never know who will enter your life and when, and what impact they will have, but Miller crediting him in this speech says a lot.

The celebrated tight end threw exactly one college pass, in his redshirt freshman season, completing it for a 20-yard touchdown, going to fellow tight end Patrick Estes. He also caught a touchdown from Schaub in that 34-21 victory.

Sadly, he never got to throw a pass in the NFL, even though he was the emergency quarterback in case everybody else who could play quarterback were to get injured in-game. They never even designed—or at least they never successfully executed—a gadget play to get the ball in his hands.

But it still worked out pretty well. After all, he was sharing that anecdote at an event in which the team that drafted him in the first round was honoring him as one of the greatest players to ever play for the franchise. He may not have ever thrown a touchdown, but he caught 45 of them, and won a couple of titles along the way.

Not bad for a tight end.