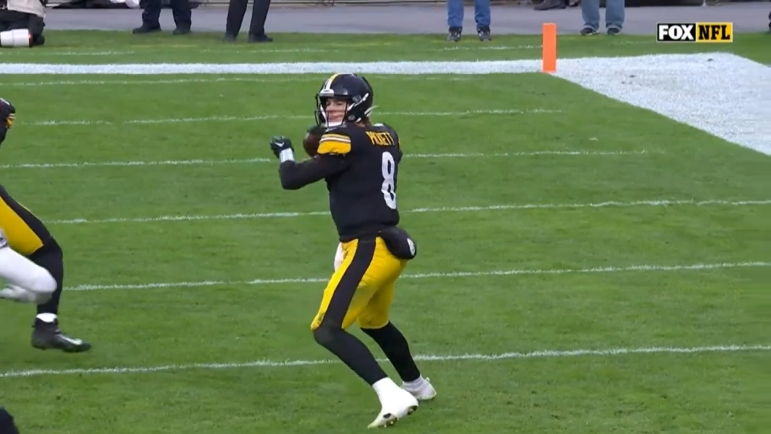 The verdict is still out, and will be for quite a while, for whether the Pittsburgh Steelers’ first-round selection of quarterback Kenny Pickett was the right pick. For now, the rookie quarterback has had his ups and downs, as is natural for many young quarterbacks. In his weekly article that grades all 32 first-round rookies, Sam Monson of Pro Football Focus graded Pickett’s most recent performance against the New Orleans Saints.

“Pickett had his first start with zero turnover-worthy plays,” Monson said on his Tuesday article. “And it’s probably not a coincidence that it led to a victory against the New Orleans Saints. He completed 18-of-30 passes for 199 yards while also adding 51 yards on the ground and a rushing touchdown. Pickett has been solid in between turnovers generally as a rookie, so if he can eliminate those consistently, the Steelers may have something.”

While Pickett’s performance did not light up the stat sheet or highlight reel, it was enough for the victory. Having played with a rushing attack that produced a shocking 200+ yard performance, his job was made easier. Of course, not throwing a turnover-worthy pass for the first is huge, and must be commended. Pickett’s turnovers cost the team greatly in recent games, namely against the Miami Dolphins. After said game, Pickett vowed to cut down on turnovers, which he certainly did against the Saints.

For more context, Pickett actually did not have a turnover-worthy throw in his second half outing against the New York Jets, or in his first half outing against the Tampa Bay Buccaneers. However, those were not full starts, and Pickett certainly hit a milestone with his development. While Pickett’s turnovers are problematic, the data may suggest otherwise. That is, 3.2% of Pickett’s throws are deemed turnover-worthy by PFF, which is tied for 21st in the league among quarterbacks with at least 99 drop backs. This suggests that his eight interceptions are misleading and not entirely his fault.

For more context, Pickett’s adjusted completion rate of 75.4% ranks 16th, while his average depth of target is 11th lowest in the NFL. Pickett also ranks 31st in the NFL in percentage of big time throws. While this data is based on a rather limited sample size, they are not unusual for a rookie.

As Monson points out, Pickett has an overall rookie grade of 62.6, which ranks third of five qualifying rookie quarterbacks. The two quarterbacks that rank over him are Skylar Thompson of the Miami Dolphins and Bailey Zappe of the New England Patriots, both of whom have played considerably less snaps. Given that the Steelers’ selection of Pickett was the first one of a quarterback in the 2022 NFL draft, it is too early to tell whether they should have taken someone else, especially given that no rookie quarterback has played nearly the amount that Pickett has.

Another important factor of whether the Steelers were right in picking Pickett are the players picked after him in the first round. The fact is, the Steelers have their fair share of roster holes, namely at cornerback and the offensive line. According to Monson’s article, only one player picked after Pickett in the first round is grading over 70. That is, cornerback Trent McDuffie of the Kansas City Chiefs, who is having himself an impressive season and a grade of 76.5.

In a quarterback-driven league, it is hard to argue against the Steelers picking one in the first round, especially after the retirement of Ben Roethlisberger after 18 years. Pickett’s struggles are natural for a rookie, and how his career pans out will remain to be seen.