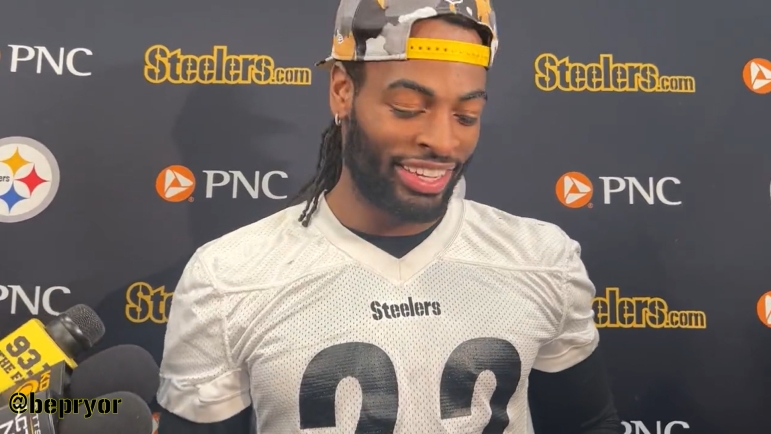 Pittsburgh Steelers rookie wide receiver George Pickens recently made the observation that he found his practices to be more difficult while he was in college with the Georgia Bulldogs than he has found it to be in the NFL this season—playing against his own defense.

As you might expect, the casual remark made a stir disproportionate to its significance, though some have rightly pointed out that it should be no surprise for a player from a powerhouse college program finding it more difficult, especially one that won a championship.

Alabama running back Najee Harris didn’t disagree with Pickens’ observation about college practices being more difficult, though he did feel the need to point out what made the Bulldogs’ practices as tough as his teammate might have found them to be.

“Well, I’m gonna talk a little shit, because Georgia, their staff came from Alabama, so their whole stuff is from us”, he said, via Brooke Pryor. “Obviously he got that stuff from us, so really he’s just following the leader, as I see it. He got his weak-ass natty [national title]”.

In answering a Q about George Pickens’ observation that he practiced vs. first-round defensive talent at UGA, Najee Harris called Georgia’s natty “weak ass” bc Bama receivers were hurt.

Pickens told me: “Bryce threw a pick-6. He was a Heisman winner, too. Weak? I don’t know.”😂 pic.twitter.com/78YbQdnahz

He was speaking humorously, of course, poking fun at his teammate while retaining bragging rights for his alma mater. And he made sure to point out all of the NFL talent that he went up against in practice while he was with the Crimson Tide.

“I played against Minkah [Fitzpatrick]. I played against Levi [Wallace], too. There’s a couple guys on this team that I played against that are first-rounders or starters with a career in the NFL”, he said. “They teach you a lot about the small stuff on defense that they look at on offense”.

Harris added that Fitzpatrick is a mentor for him and had been since he was drafted, conceding that Georgia also had similar talent while Pickens was there, with great defensive players, pointing out Roquan Smith, for example.

While they’re all Steelers now and teammates, of course, it just goes to show that old allegiances don’t fade quickly. New teammates can bond over shared college experiences, something that happens all the time, in fact. Including rivalries.