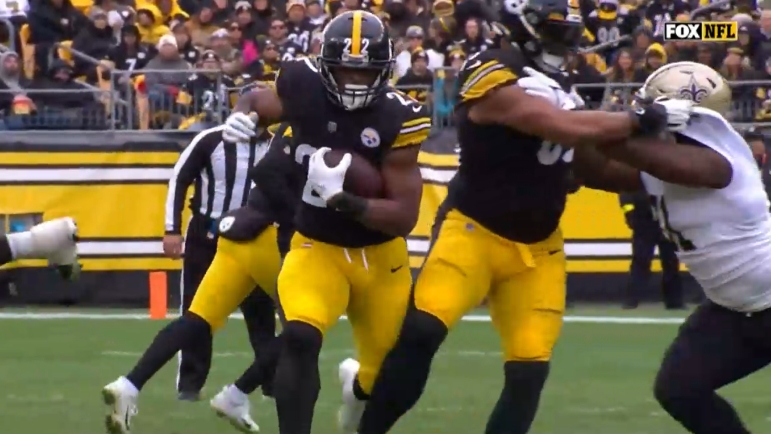 A stable and consistent running game is something that the Pittsburgh Steelers have lacked for a while now. Sure, they have had the occasional game or even short stretch of games in recent years in which it has looked effective, but establishing a run mindset that can consistently produce when called upon is something that has been lacking far too often.

Chances are Sunday’s 200-plus-yard effort against the New Orleans Saints is not going to usher in a new era of ground-and-pound football for the Steelers, but it can still mark the beginning of a general improvement in efficiency from the group, as running backs Najee Harris and Jaylen Warren are hoping.

“It brings out a lot of diversity, really. It brings out a lot of stuff we can do. We’re not just one-dimensional”, Harris told reporters after the game on Sunday from the locker room, via Amanda Godsey of the Johnstown Tribune-Democrat. “For us to put on film the run and the pass, obviously that puts a lot of pressure on other coordinators. We’ve just got to keep this up. This is one down, we’ve got eight more to go. We’ve just got to keep building”.

Harris himself contributed 99 rushing yards on 20 carries, including a season-long 36-yard gain. It was the first game for the Steeler with 200-plus rushing yards since 2010s, however, in which no one individual player rushed for 100 or more on his own.

But chances are the Steelers’ key to success on the ground moving forward is precisely through the diversity of their options, including but not limited to rookie running back Jaylen Warren increasingly taking over some of Harris’ load.

While not designed, the scramble runs from quarterback Kenny Pickett are potentially shaping up to be an integral part of the Steelers’ running presence. He rushed for 51 yards on eight carries on Sunday, including a 23-yard scamper. This is not at all out of character from what they were hoping to get when they drafted him.

And like it or not, the incorporation of jet sweeps from the wide receivers is and will continue to be a feature in how they want to attack teams on the ground, stressing defenses horizontally with speed. George Pickens, the rookie receiver, had both a one-yard touchdown at the goal line and a 22-yard end-around.

Interestingly enough, they even used Derek Watt on two short-yardage fullback dives, which he successfully converted. It was just the fifth game of his career with multiple rushing attempts and his first since arriving in Pittsburgh. Whether or not they continue to expand his deployment is unknown, but he still played only six offensive snaps despite touching the ball twice.