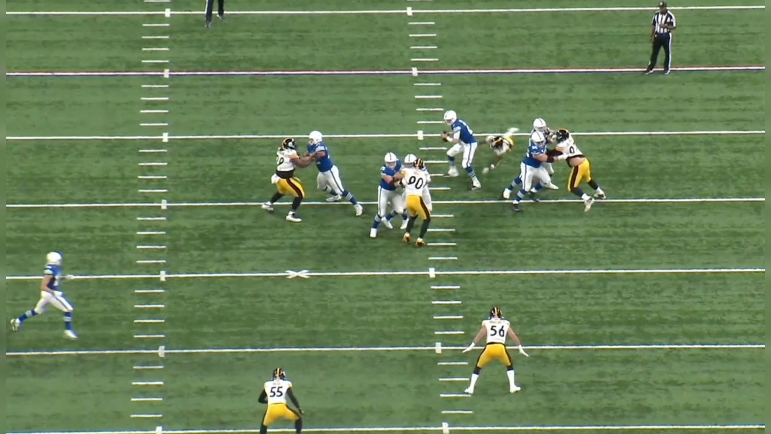 Since the bye week, the Pittsburgh Steelers have been pretty darn good in one key statistic on the defensive side of the football, that being tackling.

Overall, defenders have been pretty good overall getting ball carriers to the ground each week.

Unfortunately on Monday, the Steelers backtracked a bit, recording eight missed tackles against the Indianapolis Colts. Though the Steelers picked up the win, 24-17, the misses were a bit concerning overall, especially on special teams.

The number of missed tackles on Monday night seems rather high, but fortunately for the Steelers didn’t miss any tackles that ultimately caused plays to wind up in the end zone. That’s a positive.

That said, the kickoff coverage, which head coach Mike Tomlin already publicly criticized, was dreadful on Monday. Second-year safety Tre Norwood missed two tackles on kickoffs, helping the Colts rip off some long returns on the night. It’s a real concern that Norwood is missing tackles at such a high rate, whether he’s on the field on defense or on special teams.

He was so good as a rookie last season and has flashed at times this season, but the missed tackles remain a major concern.

Defensively though, the Steelers left some plays on the field, especially veteran cornerback Cameron Sutton.

Pittsburgh did a good job getting after veteran quarterback Matt Ryan in the pocket, creating a ton of pressure Monday night. Sutton should have had a sack on the night though.

He does a terrific job disguising the cornerback blitz here, coming untouched off the edge to race in free on Ryan. It should be a clean sack for the veteran quarterback as Ryan doesn’t move very well overall. Instead, Sutton comes in out of control and is a bit too deep in his rush, allowing Ryan to slide up into the pocket to avoid the sack, eventually throwing incomplete.

Sutton and the Steelers are lucky the pass was incomplete because that was going to be a key conversion for the Colts if they were able to convert there, which would have been disheartening for the black and gold after getting a free look at Ryan on a blitz.

Later in the first quarter, star outside linebacker T.J. Watt, in just his third game back from injury, recorded his first missed tackle of the season.

Watt does a great job of chasing this screen pass off the left side in backside pursuit, closing down quickly on Colts’ running back Jonathan Taylor to be in position to make a tackle for a short gain. Instead, Watt overshoots it, allowing Taylor to sidestep him back inside, picking up another nine yards.

Finally, I saved the worst missed tackles for last. Unfortunately, three occurred on one play overall.

The Steelers have this one defended rather well with Myles Jack sliding off the block to get a shot at Taylor, as well as cornerback Arthur Maulet closing in from the other side.

Instead, both miss at the point of contact. Terrell Edmunds is there in an effort to clean it up, but he doesn’t wrap up, allowing Taylor to keep churning through the contact before Minkah Fitzpatrick — trying to strip the football — is finally able to get the star running back on the ground.

That was a rather embarrassing rep from the Steelers overall as Taylor ran through three defenders and picked up an additional nine yards on a Colts’ scoring drive. That can’t happen.

Though Najee Harris was forced to leave the game right before halftime due to an abdominal injury, he played rather well leading up to that point. He ran hard, forced defenders to miss consistently and fell forward constantly on his runs.

Right away on Monday night, Harris showed it was going to be one of those nights for him.

Harris shows good vision here to bounce this run outside as the hole closes, turning the corner to meet Colts’ linebacker Bobby Okereke in space. That’s a matchup Harris is going to win often.

He steps through the tackle attempt and dishes out punishment at the end of the run, picking up another eight yards in the process.

Later in the first half, Anthony McFarland — elevated from the practice squad Monday for the matchup due to an injury to Jaylen Warren – forced his first missed tackle of the season on a 14-yard run.

McFarland, seeing his first action since preseason, did a great job of reading this draw play developing in front of him and shows off his speed to run right around Okereke in the hole, getting north to move the chains with the 14-yard gain on 2nd and 10.

He showed real flashes of what he could be as that change-of-pace running back, so it will be interesting to see if the Steelers can hold onto him on the practice squad, should he revert back this week.

Finally, Benny Snell Jr. had quite the game in relief of Harris.

He was very, very good. Deserves a ton of credit.

Snell ran hard throughout the contest and really stressed the Colts’ defense, forcing three missed tackles in the win. Here on this fourth-quarter run, Snell raced right through the heart of the Colts’ defense, forcing Okereke to miss in the hole and then running through a tackle attempt from Rodney Thomas II, moving the chains and recording the longest Steelers’ run of the night in a rather dominant showing overall.