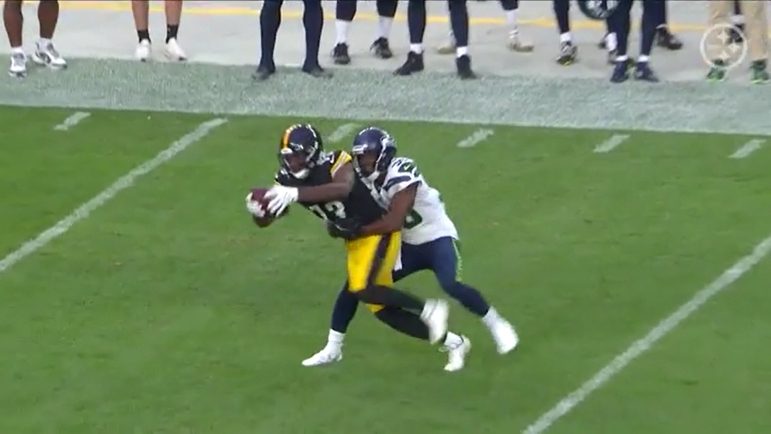 Wide receiver Miles Boykin isn’t the first player in NFL history to change teams within the division in one offseason. He’s not even the only player in the Pittsburgh Steelers’ locker room to do it this season. In fact, defensive lineman Larry Ogunjobi has now played for three different teams in the AFC North over the past three years.

Boykin is on just his second team, drafted in the third round by the Baltimore Ravens in 2019, but he was let go earlier this offseason. The Steelers claimed him off waivers and he’s been here ever since, playing in every game, albeit primarily on special teams.

While he’s long been initiated into the culture by now, he admitted that it felt funny to put the Steelers uniform on the first time after wearing purple and black for three years. “Yes. Absolutely” it felt funny, he told Mike Prisuta during the week. “But now I’m a Steeler. It don’t matter. It’s easy now. I’m proud to be a Steeler”.

But perhaps the adjustment wasn’t so hard after all. In fact, back in May as the team was breaking for OTAs, he opened up and said that he actually thought the Steelers were going to be the team to draft him (they ended up drafting Diontae Johnson earlier in the same round). “But when I got to Baltimore, it was like, ‘No, I hate Pittsburgh’”.

Perhaps now he hates Baltimore. After all, they cut him going into the final year of his rookie contract following a season in which he dealt with injuries all year. and they could use a wide receiver or two right now as well. More than anything, though, it was the locker room that made the transition easy on him, and he’s even hoping to pay it forward.

“I think it was really easy just the way they embraced me from day one”, he said. “Especially me coming from Baltimore, everybody was just great to me. I played against a bunch of them. They’ve just been great and they really welcomed me and I try to be part of this culture and fit in and do everything in my power to make everybody else feel the same way that they made me feel when I came”.

While he hasn’t become a splash playmaker on offense, Boykin has been offering valuable contributions that the average viewer is most likely not going to be attuned to. His primary role has been as a gunner on the punt coverage unit, and he has been very good at doing just that, making tackles for forcing fair catches to prevent returns.

With the trade of wide receiver Chase Claypool in recent weeks, the offense is still in a state of transition figuring out who is going to contribute when and where and how much. Boykin is in that conversation, so we’ll see if he gets a chance to demonstrate other means of contributing as the back half of the season plays out.