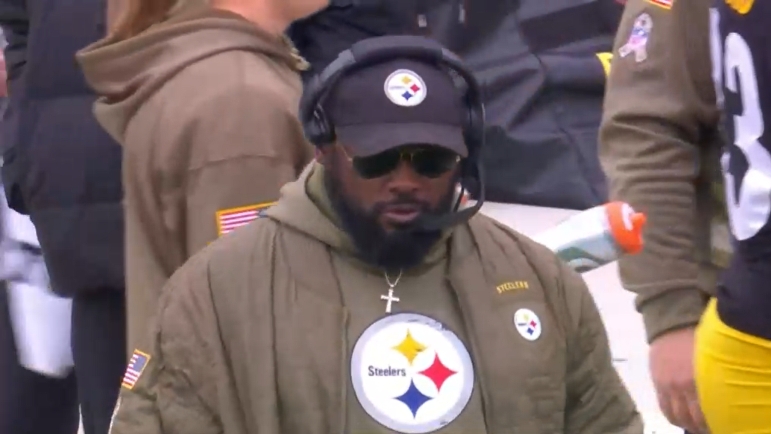 Each November on the weekend following Veteran’s Day, NFL teams honor military members and veterans. While the NFL’s Salute to Service is a year-round commitment, it’s most prominent in the days following Veteran’s Day. On Sunday, Pittsburgh Steelers head coach Mike Tomlin wore a Salute to Service hoodie during the team’s 20-10 win over the New Orleans Saints, which was his first win over the Saints during his 16-year coaching career, and it gave him a win as a head coach over every NFL team besides the Steelers. Now, per their official Twitter account, that hoodie is on display in the Pro Football Hall of Fame in Canton, Ohio alongside the uniform T.J. Watt wore in Week 18 last season when he tied Michael Strahan’s single-season sack record with 22.5 sacks.

Here is the T.J. Watt sack that tied the record #Steelers pic.twitter.com/9i9sUzWLrg

Tomlin, who’s been the man in charge in Pittsburgh since 2007, had been 0-3 against New Orleans in his head coaching career, including a painful 31-28 loss against the Saints in 2018 following a fumble by JuJu Smith-Schuster. That fumble, as some might remember, was fodder for more of Antonio Brown’s antics, as upon getting traded to the Raiders, he opined that Smith-Schuster “fumbled our postseason away.” But, Tomlin was able to avenge his demons against New Orleans on Sunday at Acrisure Stadium, as a strong ground game and defensive effort in T.J. Watt’s return from a torn pectoral led Pittsburgh to victory over the Andy Dalton-led Saints.

It’s fitting that Tomlin’s Salute to Service hoodie is next to Watt’s uniform, as Watt’s support for veterans has been well-publicized, as last year, he sent the family of a fallen veteran to the Super Bowl. Now, the uniform he wore in the last game of the best season of his career (up to this point) is memorialized in the Hall of Fame next to his coach’s Salute to Service hoodie that signifies a career-long accomplishment of beating every team besides his own.