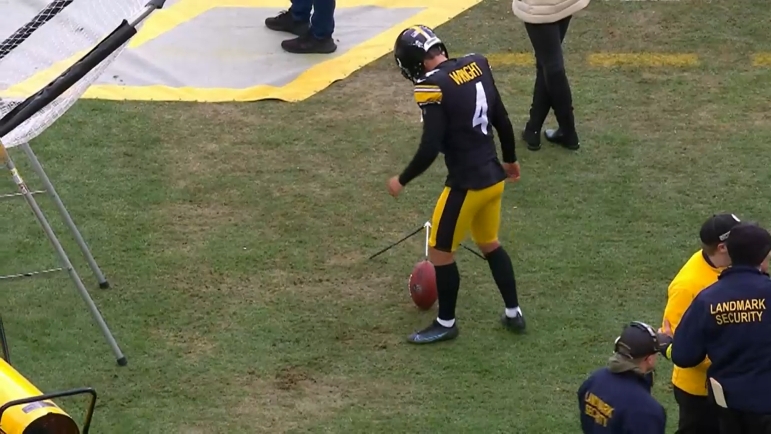 The Pittsburgh Steelers placed kicker Chris Boswell on the Reserve/Injured List last week and just played their first of at least four games without him on the 53-man roster (he also missed the game prior to that before he was moved to IR).

It could have gone better. In spite of their more intimate familiarity with the second replacement for Boswell in as many games, Matthew Wright struggled in his assignments, going 2-for-4 on field goal attempts on the day. He did connect on his extra points, but his kickoffs did not have the same leg as those in Kansas City earlier in the year, for whom he also hit a 59-yarder.

“We left some points out there in the kicking game today”, head coach Mike Tomlin acknowledged in the introductory remarks of his post-game press conference via the team’s website. “We’ll get back to work with Matthew Wright and company. Operationally, it could’ve been better and some of those things”.

Do not think that his words were not chosen carefully here. He could have just said that they would get back to work on the kicking game as a whole. He chose to actively include getting back to work with Wright, an indication that they have no intentions of making a change.

The Steelers employed Nick Sciba as their kicker the week before the bye to replace Boswell. He went 2-for-2 on field goals and hit his extra point as well, but they replaced him with Wright this past week, who kicked in place of Boswell for three games back in 2020. He also has about a seasons-worth of NFL resume.

“We’ve had success with him. He left here and had continual success within the league”, Tomlin said in explaining why they opted to acquire Wright rather than continue with Sciba. “He’s been successful this year in the league. And so we were really comfortable with that information, not only in terms of what he’s done in the National Football League but what he’s done here with us, so it wasn’t a long or significant discussion. Not necessary”.

But doing anything about it now is more complicated. Because they claimed him off of the Chiefs’ practice squad, they are required to pay him three weeks’ salary and he will occupy a spot on the 53-man roster for that duration whether he is there or not.

What they could do, if they really wanted to, is sign Sciba to the practice squad and then use standard elevations to allow him to kick for the next three weeks—or two weeks if they wanted to cut Wright. That’s a huge if, however, and one I don’t imagine will be put in play.

I fully expect the team to stick with Wright unless he has another bad game like yesterday’s. And it is notable that Tomlin cited operational issues, which fall on the long snapper and holder as well, so he wasn’t placing the blame squarely on Wright.