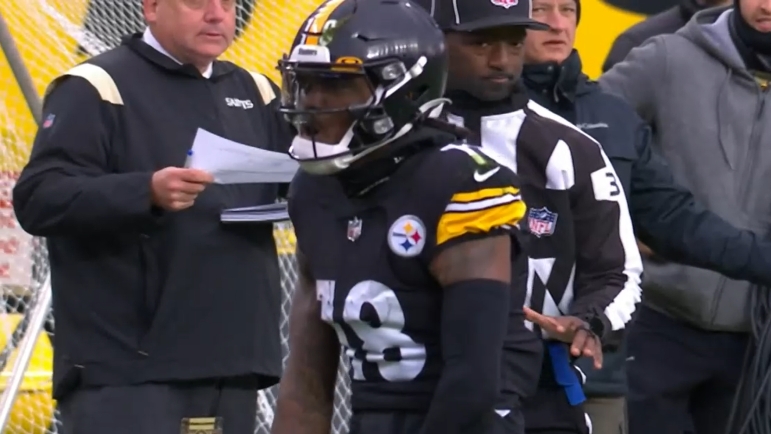 When Tomlin was asked about WR Dontae Johnson and the fact that he hasn’t scored a TD this season, Tomlin defended his Pro Bowl WR stating that he is the receiver opposing teams are game planning for when they play the Steelers.

“Let’s be frank, ok?” Tomlin said to the media Tuesday on video from the team’s YouTube channel. “Diontae is the known commodity within the group. People are going to have an agenda to minimize his impact on the game, particularly in significant moments. Possession down, red zone football. When you guy that has been a Pro Bowler, and really, he’s kind of the only one and you got a young group, that’s a component of it. So, how do you open up opportunities for a guy like that? Other guys make plays. Pickens had a nice game. Freiermuth had a nice game. Those things create balance and opportunities within your attack and opportunities for a guy like Diontae like you mentioned.”

Johnson had four receptions of five targets for 21 yards against the Bengals Sunday. This was Johnson’s second-straight game at five targets which is interesting given the fact that Pittsburgh traded WR Chase Claypool prior to the Saints game, leading many to expect a bump in targets for Johnson as well as George Pickens and Pat Freiermuth in the passing game.

Instead, Johnson’s targets have dropped in recent weeks when he was one of the most-targeted receivers in all of football to start the season. Johnson currently sits at 86 targets on the season which ranks which ranks ninth in the NFL. While George Pickens outplayed him in last week, it wasn’t due to more targets as he has had ten targets in Pittsburgh’s last two contests, the same number as Diontae.

Ben Roethlisberger: "I think, and maybe I'm biased because I love this guy and I played with him, but I think they need to get Diontae [Johnson] involved more. Whatever that looks like." #Steelers #NFL

Diontae Johnson has had an inefficient season in 2022 as evidenced in a recent post by Steelers Depot’s Alex Kozora. Johnson is the only player in the league with at least 75 targets who has yet to score. Part of that has been due to Pickett not locking onto Johnson as much as Mitch Trubisky did when he was the starting QB at the beginning of the season. Still, Johnson hasn’t done himself any favors either due to continual issues with drops, running backwards after the catch, and allowing bad plays to visibly make him upset and lose his confidence on the field.

The Steelers paid Johnson to be the team’s WR1 in the offense, thus his production has been extremely disappointing for a player that is expected to make chicken salad out of chicken you know what. While Johnson’s presence has benefited Pickens and Freiermuth in the passing game, he needs to start producing at a higher, more consistent level like the receiver the Steelers paid him to be to honor the status of being WR1 for a team that has been as good at the wideout position as any in the National Football League.