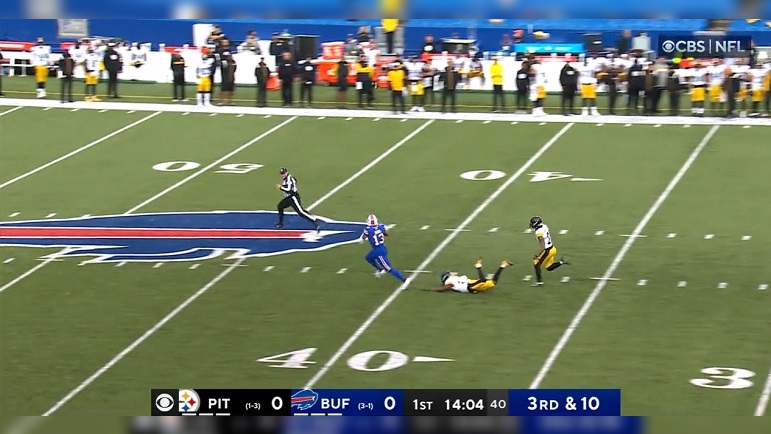 Does length matter when it comes to touchdowns scored or allowed in the NFL? Techincally, not really. That said, the Pittsburgh Steelers are on the wrong ends of touchdown lengths this season on both offense and defense.

This is the Steelers longest offensive TD of the season and it is from Week 2 versus the Patriots. – P.Freiermuth 8 yd. pass from M.Trubisky #HereWeGo #Steelers #NFL pic.twitter.com/YZlmG49Z0p

As Sharp also pointed out on Twitter, the 2022 Steelers are the only team without a touchdown of at least 15 yards through the first nine weeks of a season since at least 2000. That’s quite a dubious honor and it really helps further show how nonexplosive the Steelers’ offense has been so far this season. By the way, the Steelers have registered just 21 plays of 20 yards of longer so far this season on offense and only one other team, the New York Giants (17), have fewer. The Steelers are also one of just three teams that has yet to register an explosive run of 20 yards or longer this season.

If Sharp’s rankings aren’t bad enough when it comes to pointing out some futility of the 2022 Steelers, further examination of those touchdown length rankings show that the longest touchdown scored so far this season belongs to the Buffalo Bills. That 98-yard touchdown came against the Steelers via a long pass from quarterback Josh Allen to wide receiver Gabe Davis back in Week 5. Oh, and the Patriots’ longest touchdown of the season, a 44-yard pass from quarterback Mac Jones to wide receiver Nelson Aguilar, also came against the Steelers.

Quite honestly, it’s a bit amazing that Steelers haven’t allowed more than just two teams’ longest touchdown so far this season. Why? Well, because the Steelers’ defense has allowed 43 plays of 20 yards or longer so far this season and only one other team, the Atlanta Falcons (46), have given up more. For the season, the Steelers defense has allowed nine touchdowns of 20 yards or longer and that leads the NFL entering Week 10. Eight of those nine came in two different games.

The Steelers will play the New Orleans Saints on Sunday at Acrisure Stadium and it would be nice to see the team’s offense bust out for several explosive plays in that game. Doing so won’t be easy, however, as the Saints’ defense has allowed just 23 plays of 20 yards or longer all season. As for the Steelers defense this coming Sunday, they’ll face a Saints’ offense that has produced 33 explosive plays so far this season with six of those resulting in touchdowns.

By the way, the Steelers’ offense has managed to score just 10 touchdowns all season in eight games played.

Distances of the Steelers ten offensive TDs this season. 8 yards is the longest.