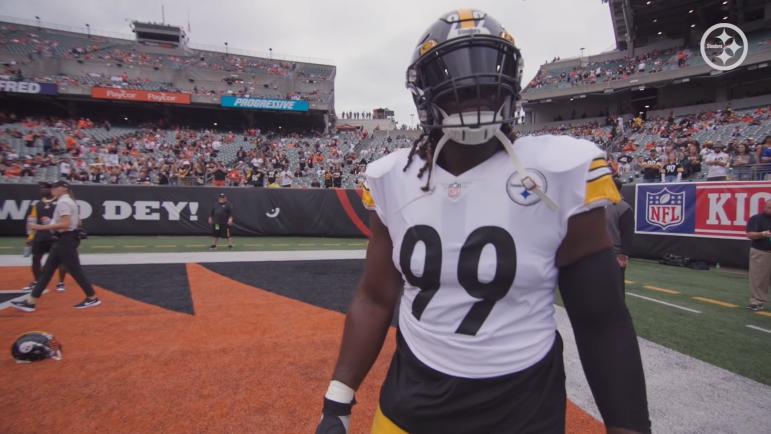 Not every player who makes it to the NFL shares a lifelong dream of making it there. Some come to the game late, whether it’s through a lack of exposure or a lack of or waning interest, at least for the idea of playing the game themselves. For the Pittsburgh Steelers’ Larry Ogunobi, it was the latter, and it wasn’t his choice when he got onto the field, either.

The sixth-year veteran told a story on 93.7 The Fan yesterday evening about when he was 16 years old and in a dilemma he perhaps didn’t even fully realize at the time. He was substantially overweight, he said, unquestionably obese, when his parents intervened:

I was 16 years old, I was about 350 pounds, obese. My mom and my dad got mad at me. They said ‘You’re killing yourself, you’re eating too much’. So they took over my game system, they got me a coach. His name is Robert Mitchell. He trained me for about a month or so, waking me up in the morning, stuff I didn’t want to do.

He got me down to like 330. One day we were passing by the high school. He was like, ‘You’re gonna play football’. I kind of looked at him and I was like, ‘No I’m not. That’s not a deal. I’m just gonna lose weight and go about my business’.

It didn’t work out that way. Mitchell when to his mother with a permission slip for him to play, which she signed. He was on the practice field that Saturday failing workouts. He only persevered at the time because of the pressure of his parents.

Yet he played, and he played well. He earned honors despite not playing in a major market, and even received five scholarships, opting to go to Charlotte in part because he was intrigued by the idea of being a part of a new football program. But his real passion for the game and turning it into something more came at the end of that first season, at an awards ceremony, when they were handing out the award for the most improved player.

“They ended up calling my name, and that was the first time that I got an award that I feel like I earned, and I was like, ‘This football thing, maybe I can do it’,” he said. “It kind of changed my mentality a lot. So I asked my coach what I needed to do. He said you need to get faster, you have to get stronger, you have to perfect your technique.”

He talked about how he immediately transitioned into a relentless regimen at the YMCA of running, biking, and other exercises, which led to him shedding over 100 pounds in the span of a year. He even lost so much weight that he had to bulk back up a bit.

But unmistakably, that was a transformational event in his life in many ways, which led him to so many good things, not the least of which is lifelong financial security. And it actually revived the young child in him, which had lain largely dormant over the subsequent decade. He recalled an anecdote from when he was just four years old, and watching a Steelers game.

Ironically, the argument went the other way a decade later, with his mother signing a slip telling him he was playing football when he didn’t want to. I imagine he doesn’t regret her decision in hindsight.