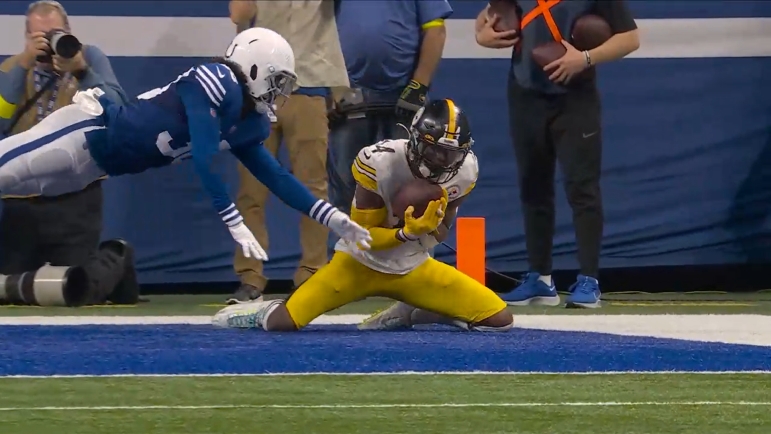 In what came down to the final drive of the game, the Pittsburgh Steelers holding a seven-point lead was no small matter as Matt Ryan attempted to drive the Indianapolis Colts downfield. Following Benny Snell’s fourth-quarter touchdown, the Steelers went for two to push their lead from five to seven. On a scramble drill, Kenny Pickett found George Pickens along the right sideline to put Pittsburgh up 24-17.

Speaking to reporters after the game, Pickett praised Pickens for making a veteran-like play.

“He went down and made a hell of a play,” he said postgame via the team’s YouTube channel. “I was talking to him all game. He’s an unbelievable player. There’s going to be ups and downs in this thing but if we stick with it, I think we’ll be alright at the end of the day.”

Here’s a look at the play, a nice ball from Pickett and snag by Pickens where only he could catch it.

Since the bye, Pickens has evolved from a one-trick pony, a pretty good trick as a downfield threat but still a one-trick guy, into a more complete receiver. He’s run a fuller route tree, gotten involved in the run game, won at all levels of the field, and showed his football IQ on that scramble drill.

To be a top-end receiver, you have to increase your versatility to increase value. Pickens was a relatively raw receiver coming out, an underclassman who missed most of his final year of college due to a torn ACL but he’s on an accelerated curve and his raw talent is undeniable. For the season, he’s already over 500 yards and has emerged as a consistent top threat in this offense, something they sorely need.

Pickens finished the day with a team-high 57 yards and that two-point score. He continued to make his patented big plays downfield, a fantastic toe-tapping catch for a 35-yard grab down the right sideline. There’s no question Pickett and Pickens have developed a nice chemistry that began in rookie minicamp and OTAs and only evolved from there.