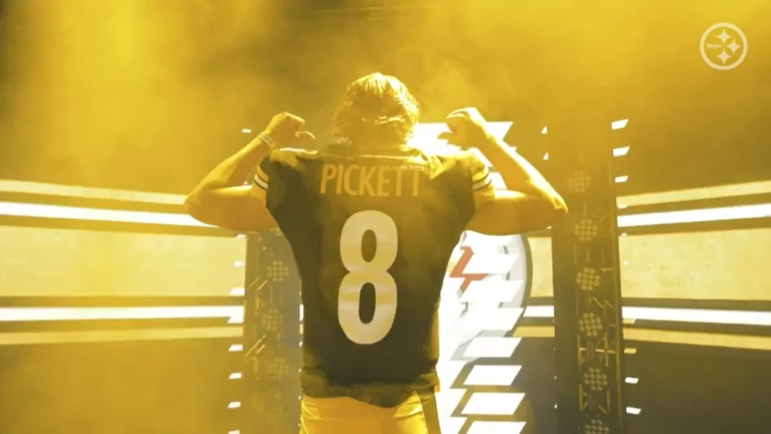 Fourteen teams drafted before anybody selected Pittsburgh quarterback Kenny Pickett in the 2022 NFL Draft, five of them drafting multiple times. None of them decided to take him or any other quarterback until it came time for the Pittsburgh Steelers to select. This was in spite of the fact that many of those teams, such as the New Orleans Saints, were in the market for a quarterback.

They were among those teams in need of a new arm who decided to forego the position altogether, moving forward with what they already had—Andy Dalton, Taysom Hill, and Jameis Winston—even if they did use their two picks in the top 19 on a wide receiver Chris Olave and tackle Trevor Penning.

Pickett told reporters from the locker room yesterday that he did have some pre-draft contact with the Saints, among many other teams no doubt, via the team’s website. But when asked if New Orleans and other teams passing on him left a chip on his shoulder, his response was unequivocal.

“No, man, I’m happy as hell to be here”, he said, having the opportunity to play in the same stadium where he played college ball for five seasons. “Everything works out for a reason. Incredibly proud to be the quarterback of this team, so I’m excited to go out there and play on Sunday”.

Pittsburgh found itself in the unusual position of having a need under center following the retirement of Ben Roethlisberger after 18 seasons. While they signed veteran former first-round pick Mitch Trubisky in free agency and retained fifth-year Mason Rudolph at the position, they weren’t passing on Pickett when he went unclaimed at their 20th-overall selection.

As seemed to be the plan all along, Trubisky did start at the beginning of the year, even named a team captain, but poor results forced head coach Mike Tomlin’s hand earlier than planned. He pulled Trubisky at halftime in week four and hasn’t looked back since, with Pickett starting the past four games and the intended starter for the indefinite future.

Not that things have gone all too smoothly. The Steelers are 1-3 in the game he’s started, and he missed most of the second half in that win—even if they did have the lead when he exited with a concussion. But he’s thrown only two touchdown passes in his four starts to five interceptions. He threw three more interceptions in the second half of the game in which he replaced Trubisky, though he also rushed for two scores.

Pickett’s first month in the starting lineup has revealed plenty of good and plenty of bad, but his story remains very much unwritten. Can some midseason adjustments and self-evaluation lead to improved play both from the offense and from the quarterback? It should, but whether or not it will is another matter.