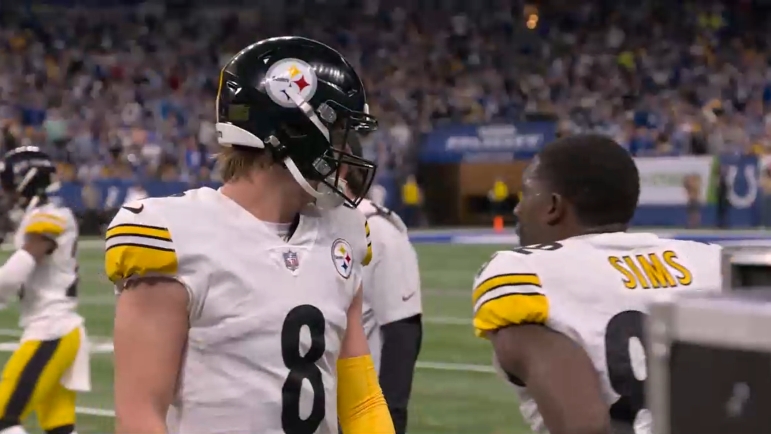 The Pittsburgh Steelers emerged victorious over the Indianapolis Colts last night—much to the chagrin of the large segment of the fan base who wants to see the team tank to improve their draft lot. The win as of this moment knocks them out of the top 10 draft picks, though it does keep alive dim playoff hopes this year, and the Steelers organization always, first and foremost, plays for this year.

They had opportunities to pack it in, surely. Even with a 13-point lead at halftime, they managed to blow it in a three-phase effort, the kickoff coverage failing on the first play, then the defense subsequently allowing several good drives, with two touchdowns, a fortuitous fumble sandwiched in between them mitigating some of the damage.

The offense, too, was slow to start back up, going three and out on both of their third-quarter possessions. But they responded with the one drive they needed, an 11-play, 75-yard touchdown possession that gave them a lead they wouldn’t relinquish. And quarterback Kenny Pickett credits the offense’s unity and camaraderie for that.

“It’s a group effort. If I make a bad throw, those guys pick me up. If they miss a block or they drop a pass, I’ll pick them up and we just continue to move on that way”, he told reporters after the game, via the team’s YouTube.

“That’s what great teams do, great teammates do”, he added. “You just continue to see the improvements throughout the game. When we get back on track like we did and converting those big third downs, going down there, punching it in and then getting that two-point conversion, I think everybody sticking together and working toward that same goal is really what drove that”.

There were definitely opportunities for all parties to get upset. Pickett missed some easy throws or made easy catches hard. Diontae Johnson and George Pickens both failed to complete several catches between them—I’ll leave the debate about which were drops aside for now. And the offensive line had an untimely penalty or two, though, on the whole, they played pretty well.

Much is owed to the ground game, truth be told, which is notable given that Jaylen Warren was inactive and Najee Harris was ruled out for the second half. Most of the workload came from two players who hadn’t touched the ball all year: Benny Snell Jr. and Anthony McFarland Jr., the latter called up from the practice squad.

This is an offense without any bona fide superstars with nothing to prove. This is a workmanlike group that understands—and has to understand—that their success or failure rests within their cooperation with one another. And sometimes that means picking each other up when they’re down.